One of the things I love to do is buy frames.  Any frame that captures my eye.  Sometimes I leave them as is and just replace the picture with mine – sometimes I redo the whole thing.  In this case I really had planned to leave the frame as it was and just replace the picture.  But you would not believe the struggles trying to get this apart.  Every single piece and layer was glued in there.  In the end I was just trying to salvage the glass and even that shattered.  I will figure out something to do with this though.  I may add some antiquing touches to it before I use it but for right now it is just a black lacquer finish and it is waiting for a picture.  What else I do to it will depend on what photo I put in it. And you know the drill – it is sitting in the garage until I decide what to do with it. 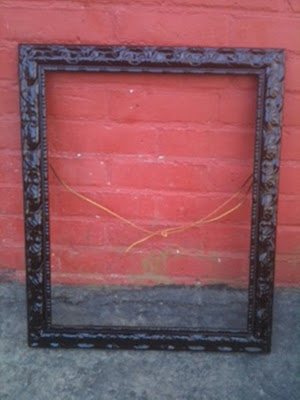