Rules of the House

These house rules were instituted around January and they have been working very well.  We have this poster hanging on the wall above the kids computers for them to see at all times.  They refer to it constantly.  Every night (or that is the plan – some nights we need to postpone to the following night) we tally up their day and put coins (poker chips) away to be cashed in later in the week.  In practice we end up cashing in biweekly because that is my pay schedule and it works so much better that way.  They very first thing they did with some of the money they earned was buy themselves each a toy ATM.  So their cash we deposit into their ATM weekly and they make withdrawals when they have saved enough for something they want. 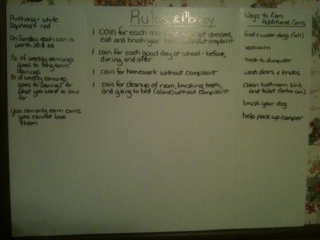