My surprise at Lowes today

I had to run into Lowes today because I ran out of primer and a few other things.  I was in a hurry and not entirely paying attention to my surroundings when I slammed right into this guy.  Of course I apologized profusely before I even looked.  Then when I did look I stared at him – perhaps a second too long and he smiled a funny smile.  As I was walking away I had that nagging – where do I know him from.  As I started my car the realization of who he was nearly knocked me over – it was Rudy Pauls from last season’s Biggest Loser.  And no doubt that smirk on his face was because I am sure I am not the only person who has stared at him trying to figure out just what it is that they recognize.  Too bad – I would love to have said more than just an apology – but at least I got that much out. 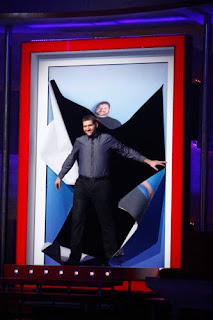