I was able to score a rolltop desk for Sephora for a mere $7.50.  I had been watching this desk for months and happened to go into the thrift store, per my son’s request, over Spring vacation.  Lo and behold – the desk was still there, marked down to $14.99 and that day only – 50% off.  Since I had the suburban with me I just couldn’t leave without it.  Here is the “before” shot. 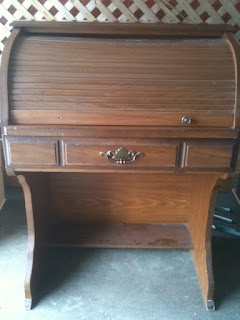 There is a problem with the rolltop and it gets even more complicated as you read on – but let’s proceed.  First I lightly sanded the piece since it has a sort of laminate covering over solid wood.  Then I removed the back to pull the roll top out; then I removed another rear piece to remove some plastic dividers – I did not put those back in.  They weren’t going to serve any purpose for a six year old.  Then I primed each piece – it always goes pretty smoothly through the priming process. 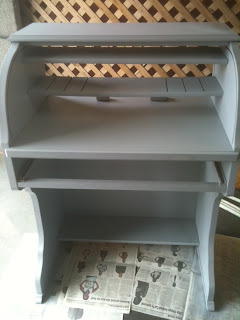 I next moved on to painting.  Sephora chose a seabreeze color and I chose to use Krylon spray paint.  The main body wasn’t too difficult to paint but I had to do it in the garage due to some potential weather issues and the fumes were killing me even with a mask.  I persevered though… I also primed the drawer (after removing hardware of course) and the rolltop.  I layed the rolltop over a large bucket (the rounded side) in order to keep the slats in the open position.  For some reason the paint just did not want to adhere to the bottom part of the rolltop where the knobs are – still struggling with that.  Then I needed to put it all back together – not to hard right?  Wrong.  The first rear piece was re-attached no problem.  That rolltop piece was a true headache.  It should have slid right back in but because the slats weren’t as pristine as they could have been, it was not just sliding in.  Plus somehow a staple was now in the way of it’s return route – even though it caused no trouble on the way out.  That staple was so far embedded I had to dig through the wood around it just to remove it.  Once I accomplished that – I still couldn’t get the rolltop in.  Now this is where I made a huge mistake – which I will never make again.  I almost decided to put it back together without the rolltop but NOPE – one more shot.  My big idea was to coat the edges with vaseline so they would slide right up and back in.  It worked – though it certainly wasn’t a smooth process sliding right back in – I worked up quite a sweat.  I was so proud of myself when I got it back in til I walked around to the front of the desk…. Did you all know that vaseline just causes paint to wipe right off?  Now, the paint wiped right off all over the front of the desk (anyplace I accidently touched with vaseline on my gloves), wiped right off the whole left and right hand sides of the rolltop.  I wiped down the best I could, repainted and am now in the process of hoping for the best.  We actually brought it upstairs to Sephora’s room even though it isn’t dry because it is supposed to rain and it won’t have a chance to dry in all that humidity in the garage.  We carried this huge, extremely heavy, wet paint rolltop desk up three flights of stairs.  Needless to say it required some “touching up” once we got it up to her room.  But here is the desk before it gets to marked up and all the paint melts off. 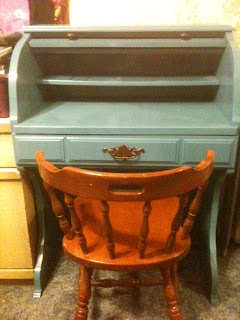 The chair doesn’t match yet and I am not going to worry about it until I know if the paint is going to stay on the desk.  She will be totally devastated if it gets ruined.

How to Properly Maintain Your Sofa

Steps to Find the Right Place for Renting Furniture