This is the first stage of a project I have been wanting to try.

First, you take some jumbo craft sticks and boil them (in water of course) for at least a half hour.  This process will make them flexible (most of them).  I boiled quite a few more than I wanted because we probably had to throw half of what I boiled – out.  They split or broke entirely when I tried to manipulate them.  We salvaged quite a few though.

So after you remove them from the boiling water and they are cool enough to touch.  Start massaging them with you fingers and manipulating them into a circular shape.  We (my daughter and I) then placed them in plastic McDonald glasses to cool overnight. 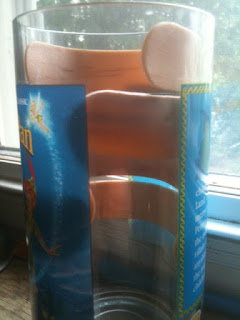 By the morning they will have dried and hopefully retained their shape.  Then my daughter and I will quibble over who gets to decorate how many.  Then they will be ready to wear.  They can be decorated with anything you have – paint, markers, paper, fabric, modpodge, beads, gems, buttons – truly anything.  Personally, I would like to decorate one by painting it then gluing fabric covered buttons onto it.  You may end up seeing that in a future post – who knows.

UPDATE – first off that glass was way to big.  The sticks did not retain their shape.  But they were still quite pliable the next morning and damp so we moved them all the way down to the size of a shot glass (which we used a very small measuring glass).  A couple more split in that process.  In the end we had four that were usable – now that we know the timeframe and size we will make more.  It took about three full days to dry.  Since there were only four I gave all of them to my kids to decorate.  This is the end result of my daughters – keep in mind I was trying to get them to fit on a child’s wrist.  You don’t need to go to such a small glass for an adult wrist but definitely use a glass smaller than your wrist size. 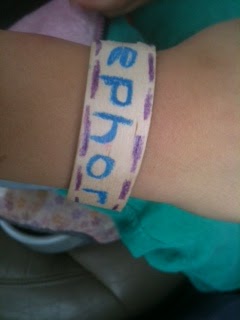 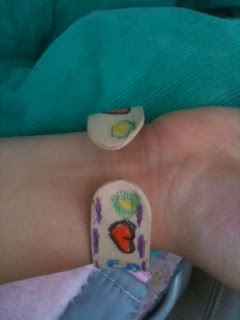 These were colored with simple crayons and as you can see – it fits a six year old wrist perfectly.  You can’t imagine how difficult it was for her to be patient for three full days when I thought they would have dried out by the next morning.  She is happy now.