StumbleUpon
Well since my husband doesn’t read my blog I think it is safe to put this out here – so please don’t clue him in.  I found this nice (structurally) large wooden chest at the thrift store.  Now don’t ask me what he can do with it because I don’t have a clue.  My guess is it will either end up in his office or more likely in the basement to be used to house something.  Either way it is a project for me – and projects make me happy.


So here it is in all its glory with a horrid paint job.  There are some deep nicks in its edges and the deep ones I filled with wood putty but the smaller ones I left as is – I wanted it to keep its character but not necessarily significant flaws.  AND I definitely couldn’t hack the paint job.  As soon as I grabbed it up, people were offering me money to let them buy it instead.  They were just going to resell it as is and I wanted a better life for this chest.  So, no – I kept it.  Of course for the right price I would have easily given it up.

There are nice handles (forgot to take a picture of them) on the left and right sides.  There is no front latch.  The rear hinges had been painted over so I just re-painted over them.


It immediately got tricky.  Like I said – I used wood putty for some spots.  Then I primed it with Valspar primer – no sanding or stripping.  Whatever they used for paint just bled right through the Valspar primer.  I then went to the big gun primer – Kilz.  Same problem so I put two coats of that.  Still bled through – One more layer of Valspar (ran out of Kilz).  Finally the primer was all I could see except a little bleed through of color on the top/left of the cover.

I really had no idea or plan what to do for this chest.  So when all else fails I chose extra glossy black.  No real reason other than I had it on hand and I know my husband doesn’t like the bright colors I have – pink, purple, neon green, or raspberry just aren’t colors he would choose.

It is so glossy black with no hardware that you can’t even see it’s features.  I tried very hard to get a photo that shows detail but until I add the hardware – it seems this is what it is.


Next step – I bought some ornamentation to add to it at Home Depot.  This is where the project starts to cost a bit.  But since the chest only cost me $2.50 I figure it is still an awesome gift for my husband.  His favorite color combination is black and orange – no surprise to anyone who knows him.  I primed the ornamentation and spray painted it orange. 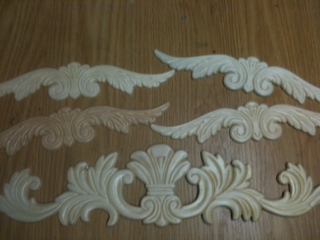 Then I glued them to the sides, front, back and the large one is for the most prominent – top.  I then purchased a clasp for the cover.  I wasn’t impressed with anything I could find so this is the one thing I felt I had to settle on.  If I can find something better later – even if I have to buy a cheap piece of furniture to get it I will – but that will take time and I don’t have a great deal of that right now.  I do have the patience to change it later.


So this is the finished chest (06/07/11) and I need to hide it til Fathers’ Day – hmmm.  I will probably move it from the garage to my craft room – that room is too girly – he has only step foot in there once.  Works for me.

And I love this final angle – it is only 29 inches long but this last shot makes it look like a huge casket! 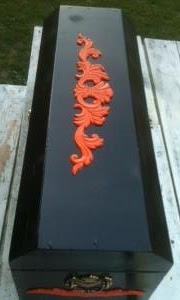 The kids and I have so many other surprises in store for “Daddy” for Fathers’ Day this year he will be so surprised!
Share