We have this old Coca Cola swing for the yard.  It is approximately 8 years old and has seen much better days.  This was the year we were just about to ditch it.  But have no fear – I just couldn’t do it.  Instead I decided to re-do it.  A friend of mine gave me some great fabric – FREE and wanted to see exactly what I was going to do with it.  Since it was a great deal of fabric, this will not be the only project – though it is the first.

The fabric is a very heavy weave – perfect for outdoor use.  However, it didn’t match the red of the Coca Cola swing.  Trying to plan for the future I decided the following things – first I would paint the metal parts of the swing black – black is very versatile and if I need to cover it every couple years, black works OR if I decide to make additional covers and switch it up every now and then.  Second, I didn’t want to re-upholster it, I just wanted to cover it.  That way I can take the cover off for the winter; I can wash it – or do whatever with it.  Essentially I am keeping the cushions mostly as they are.

Here is the swing – BEFORE (yes I finally remembered to capture a before shot). 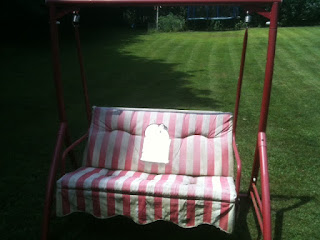 Next I removed the seat from the frame and primed the pieces. 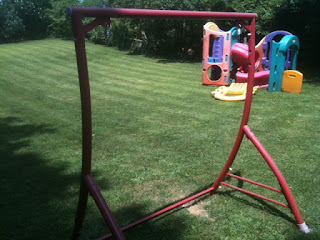 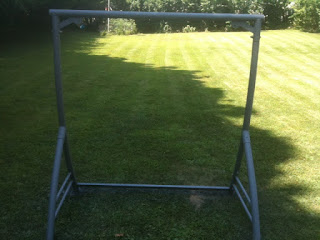 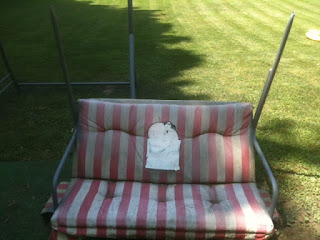 Then I spray painted the metal black.  The red was in sad need of being updated anyway.  It looks so much better in black.  ﻿ 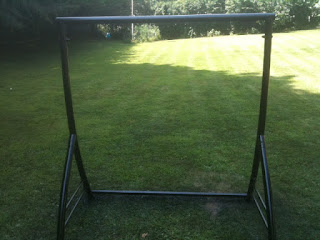 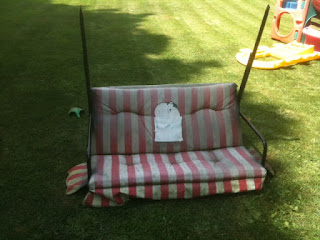 As you can see I painted the metal without removing the cushions.  Makes no difference to me since I will be covering the cushions.  No one will ever be sitting on them again.  And if for some reason they do – the paint is exterior paint and won’t come off anyway – it just isn’t nearly as attractive to look at.﻿ 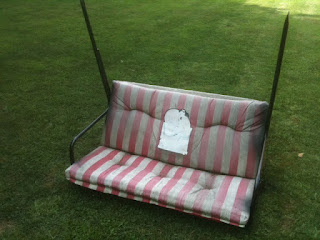 I then cut off the ruffled edge – that won’t be visible once it is covered so there is no reason to keep it.  Gonezo…

I took that great fabric and basically sewed it into a nice large rectangle with a couple inches to overhang the bottom and the back.  I should have made the width just about 1/2 inch wider but no biggy – it works fine for us. 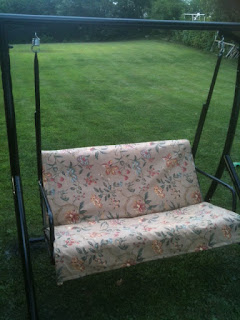 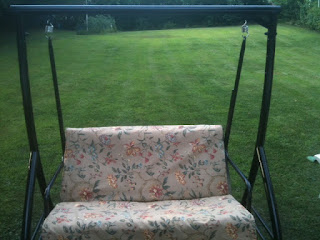 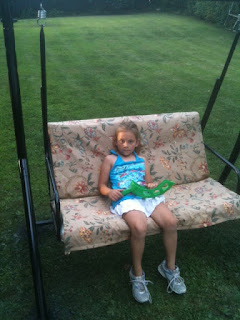 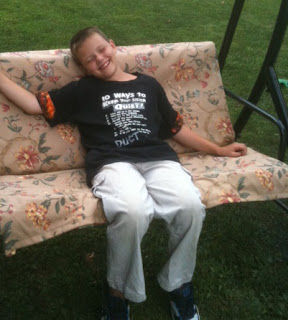 Now here is an interesting tidbit (and don’t look for it because trust me – you can’t see it) – I was trying to figure out how to get that cover to stay on the swing.  But my solution was soooo easy and it isn’t going anywhere.  I thought of straps and velcro etc… but in the end – you see the nice crack where the back support meets the seat?  I just wedged a 1/2 inch dowel rod in there and it holds everything neatly in its place – the kids have no idea it is even there.  I think this is so much nicer than the original ripped and faded Coca Cola swing.