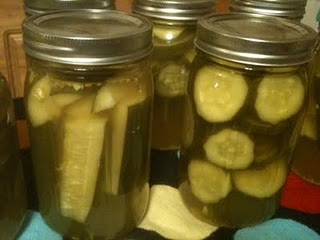 This is my first attempt at canning pickles so I just used the pre-packaged dill mix.  But it appears as though they came out quite tasty.  The package was sold at Walmart in the canning aisle – Mrs. Wages Kosher Dill Pickle Mix. 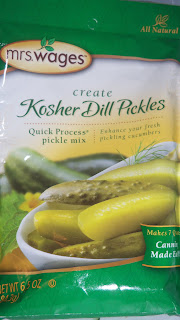 I added 3 1/3 cups of white vinegar to the mix and 7 1/3 cups of water.  Bring the mix to a boil until the mix dissolves and turn off heat – then fill the jars with the liquid mixture over the cucumbers.  But of course I didn’t plan appropriately and needed to whip up another batch of the mix.  I actually could have used a third package but didn’t have one.
Select your cucumbers.  I used pickling cucumbers for the sliced pickles and regular cucumbers for the pickle spears. 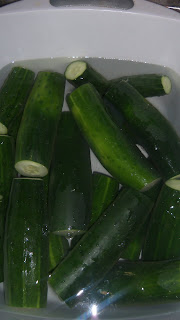 Cut off the ends and wash the cucumbers 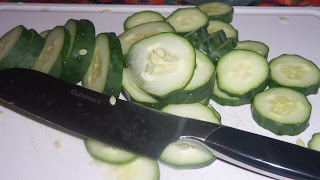 Either leave whole, cut into spears or slice
See that lovely knife?  That is the same knife I was using on New Year’s Eve when I was trying to cut up a caramel apple (yes I know – what was I thinking but I couldn’t get a regular knife through the apple) and almost cut off my finger.  Oh – the kids have blown that story up since then.  I finished the cucumbers without incident though.
Sterilize your jars and lids and keep in hot water until you are ready to fill with cucumbers.  Start your water boiling in your boiling water canner.  While you are waiting for that, start filling your jar with cucumbers, add your liquid mix to within a quarter inch of the top, place a lid and cover on.  Start placing in the boiling water canner.  The water once boiling should be right up to the top of the jars.  Wait for it to boil and keep in boiling water for ten minutes.  Remove from boiling water with your jar lifter and place in a safe room temperature spot where the jars cannot accidentally bump into one another – which could cause the jars to break. 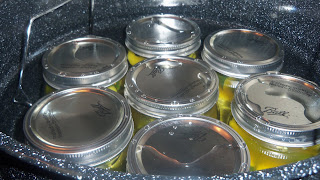 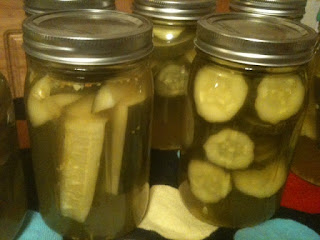