What do you think?

It is now October 28th and early in April our Weimaraner was at death’s door.  I actually brought him to the vet to put him to sleep because he was in such pain and distress.  But just couldn’t do it so I brought him back home.  I struggled with that decision and promised the family that I would not make him suffer too much (and what is too much?) but it just didn’t feel right.  I have had to put dogs down before and never struggled with the decision but this time I just couldn’t do it.  The vet said he didn’t have long – maybe a week or two but gave me some strong meds to make him comfortable during that time.

I gave him the meds for 24 hours then stopped.  I changed his dog food to the best food I could find without wheat and with minimal byproducts.  Now to contradict that philosophy I decided that if he was dying anyway I was going to give him whatever he wants.  If someone was eating chocolate and he wanted it – by all means give it to him.  What was the worst that would happen – he would die – but he was already anyway.

Now in six months he literally has only had one or two days where he is uncomfortable but not enough to not function – just enough to be a little sluggish.  Otherwise he is still the hyperactive weimaraner he always has been – only he listens a little better at his old age.

So here he is eating Tostitos Tortilla Chips – enjoying them immensely and I have no guilt whatsoever giving them to him!  He is a “Blue Weimaraner” so his hair is very black except for his gray on his face from being elderly… Doesn’t he look so happy? 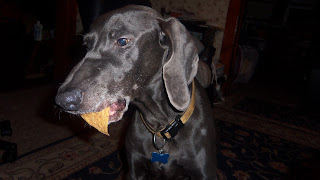