The World of Skunks

So yesterday I shared a photo of the skunk we finally captured.  He was captured on day 1 of setting traps.  Easy Peasy.  BUT we knew there were at least two skunks.  So last night I came home and found this guy… 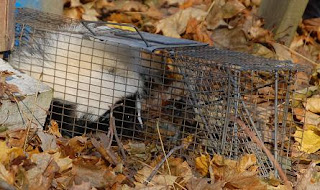 Meet skunk #2.  He was quite nerved up and not happy to have anyone around him.  Problem was while I was shooting a photo of him (telephoto of course) I heard something to my left.

Meet skunk #3!  This photo is quite blurry because I was caught by surprise and decided it was best to not hang around.

Now the problem is we had to pay to have the traps set and we have to pay for each skunk that has to be removed from the property.  This is seriously eliminating any money we could have had for Christmas.  So I need each and every one of you to pray that not one more skunk makes an appearance and our skunk woes are over!  But since we trapped three in less than 24 hours, our trapper is not confident that we have them all at all.   And sadly, our dogs are not acting like we have caught them all.  They are still acting like there are skunks under the shed.  Our trapper has seen as many as 15 in a burough.  That would absolutely give us a stroke and we would need to take a loan just to have them removed.

Did you know that skunks are second only to racoons for carrying rabies and other major diseases that can be transmitted to humans?

Did you know that skunks are nocturnal?

And if they aren’t, they are probably sick?  (Ours are awake and spraying at all hours of the day).

Did you know in Connecticut it is illegal now to try to domesticate any type of wild animal and you cannot de-scent a skunk and keep it as a pet?  (Not that I want to but my grandmother used to claim she did just that years ago).  I don’t know what other state laws allow.

And – did you know that tomato juice is not actually an effective solution to remove skunk odors?  The better solution is a combination of baby shampoo, baking soda and hydrogen peroxide.