Athena Answers – How To Win At The Claw Machine 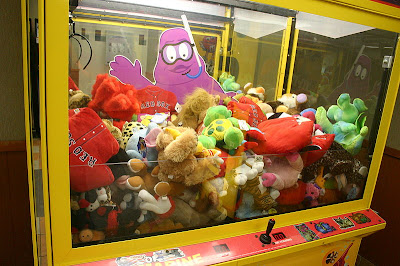 Now this may seem like a strange topic for my blog but it is something that I have been researching lately.  My kids love those crazy games.  I tell them over and over again that most people don’t win but they insist on spending their money on them and they inevitably cry when they don’t win or worse – when one of them wins and the other doesn’t.  So I started to research exactly how to increase the odds of winning.  First and foremost – before I get into strategy, it is important to know that each machine is specifically set with some proportion of increased likelihood.  For example – a machine may be set for every 20th play.  What that means is that as the number of plays gets near the 20th play, the strength of the claw increases.  So if you happen to be the player with the proper strategy on or near that 20th play your chances of winning are greater.  What you don’t want to happen is to totally have no strategy at that time because it will start all over again – whether or not anyone has won.

We all know most items in those machines are not worth playing the games over and over again for.  But if you could increase your chances in win every other game – would it be worth it then?  For my kids, probably.

Choose a machine that is not totally full.  You do not want your prize options to be squished in together making it more difficult to win.

Know how many seconds you have to play the game.  Some machines have the seconds displayed on the machine while others leave you guessing.  If the seconds are not displayed, watch a few people play the game to see how much time they have.

Look for prizes that are “free” from obstruction – avoid prizes that may have arms or legs tucked under something making it impossible to free them.

If no prize looks like a great option or if the prizes all appear to be too heavy and the claw keeps dropping them – stay close to the prize chute.  That way if the claw at least has the prize for a second and drops it, it could end up falling down the chute and make you a winner anyway.

There are two types of claws – a four prong claw and a three prong claw.

When playing with a four prong claw – These claws are best for grabbing around the belly or the chest area of an animal – or the heaviest section of the prize.  Try to position the prongs so they fall above and below the arms of the animal on the high chest area.

When playing with a three prong claw – Try to get these claws around the left or right arm and around the chest area.

The center is not determined just by looking through the front of the glass where you are trying to win a prize.  Before you even put your money in, determine what prize has the greatest chance of success.  Walk all around the machine and understand your angles and plan your strategy.  If you play pool, you have a good idea how that works.  If you cannot walk around the machine, the machine probably has mirrors.  Use them.  If you have a friend with you have them help you from the side of the machine.  You only have so much time and you must use as much assistance as you can get.

Now all I need to do is stake out a machine and put these strategies into motion – without the kids and without the drama.  Once I perfect the process I will be even more god-like to them!

UPDATE – Since I wrote this post I wanted to try and put the tips into action and see if they really work before I made this post “live”.  I went to Walmart at where I knew there was a claw machine.  Just to show you how little I actually paid attention to them in the past – there were four machines.  There were three stuffed animal machines with varied prize sizes and they were priced to play accordingly – $.25, $.50 or $1.00.  Then there was also a non stuffed animal prize machine for $.50.  For this experiment I stayed away from that one.

It was very interesting now that I know what I know.  First – you cannot get to the side of any machine to “compare your angles”.  There were four machines placed side by side and on one end was a soda machine and on the other – a Redbox machine.  They provided no opportunity to compare my angles.  I still wanted to give it a shot though.  All four machines were the three prong claw variety.

I only brought in $2.00 in quarters – it was either going to work with that amount of money or it wasn’t.  I spent about five minutes looking through possible options.  But my newfound knowledge made it clear that almost nothing was a suitable option.  There was nothing worth trying in the two lower value machines except one Tazmanian Devil stuck right against the glass and since I knew the claw would not grab right up against the glass I didn’t waste my money.  In the $1.00 machine there was this big stuffed doll.  It was really the only thing I could see as an option.  Everything else was truly stuffed down into one another and if I couldn’t see the entire stuffed animal – not an option.  However on this one I wasn’t sure whether to go with the heaviest section of the doll or the chest area (the head is huge).  I went with trying to get the claw at the upper chest to grab around an arm.  And to my surprise it worked perfectly.  So in one try with this new knowledge I scored this for my daughter…  It is about 14 inches tall and only cost me $1.00. 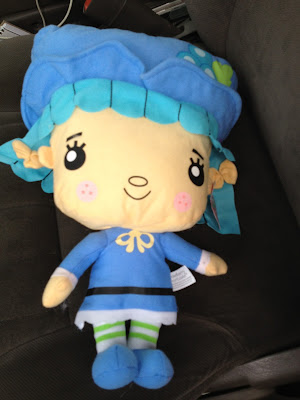 Moral of my first claw exercise – if it doesn’t look possible it probably isn’t.  And you can’t just try for whatever it is you really want – you have to try based on the real possibilities.  I would never have tried for this doll – I would have tried for something like the Tazmanian Devil.

And just to prove to myself that it wasn’t a fluke – I went back on day 2.  I had $3 in my pocket and based on the four machines, again felt the best option(s) were in the large animal machine that cost $1 to play.  This time there appeared to be several options.  I went to the largest of the available options.  I really was skeptical about whether or not the claw could even hold this large animal but figured I would give it a try.  A Walmart lady was cleaning the glass of the machines and asked if I minded if she watched or if it would make her nervous.  I said not at all – I am conducted an experiment.  This time it cost me $2.  The first attempt did pick up the animal but like I said – it was very heavy so it dropped it – but it dropped it right near the chute.  I put in another dollar and it picked it right up and dropped it in the chute. 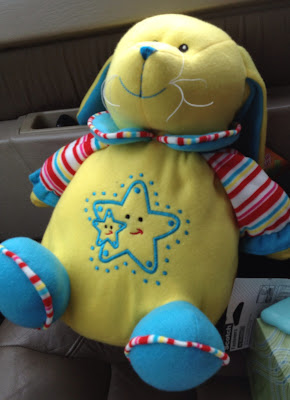