A Strange Day – One Event After Another

So today we had plans to go to the beach.  My husband went to wake me up and I BEGGED him to let me sleep – but after five minutes I conceded and got up.  My allergies are out of control and I just wanted to get more than six hours sleep.  Alas – not today…

We packed up and went to the beach.  After we parked the truck at the beach and were in the process of unloading I started getting bit or stung in the back of my legs.  At first I thought it was in my mind.  But then I was getting “attacked” by something.  Just one bite after another.  My kids were right beside me but thankfully nothing was bothering them.  Seph kept slapping at my legs.  Bill couldn’t figure out what was wrong.  By the time he came around the truck I was nearly in tears and Seph told him I was being attacked.  I could not get to that cold beach water fast enough – I immediately went in and soaked my legs.  I still don’t know what was biting me but Seph said they were big black flying bugs – for what that is worth.

Once through that drama we took our trip to the sandbar – this trip is only possible an hour before low tide through approximately an hour after low tide and don’t get caught on the sandbar after that; if you do, you better hope a police boat is there to rescue you – YUP – been there and done that!  Anyway, the kids took their new body boards with them onto the sandbar.  They kept using them on their bellies as skimming boards.  At one point Anthony tried skimming to close to the shore.  The board never moved and he slid across the sand on his chest!  At first he refused to acknowledge that his chest hurt but it was clear it did.  He finally started crying that his chest was burning.  That sand burned up his chest…

The next three hours were uneventful.

When we went to pack up our spot on the beach and head to the truck – I felt something bite or cut my leg.  When I looked down my leg was bleeding ALOT and the blood was dripping into my sneaker.  I wasn’t panicking or even really too worried about it – but you should have seen my kids.  Sephora kept running for napkins to try and clean it up and assess the situation.  Anthony was telling everyone that I was bleeding all over.  With his stories I was surprised paramedics didn’t pull up – he made it sound like I was a victim of a stabbing!  Needless to say the bleeding stopped all by itself – although I still have no idea what caused it.

When we got back to the campground the kids wanted to go to the pool.  I was still not feeling too well and really didn’t want to – but SUCK IT UP CUPCAKE – do it for the kids.  Of course once I got them there several more hours went by before I could get them to leave.  Don’t they look like they are having a blast! 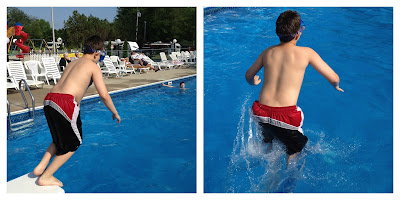 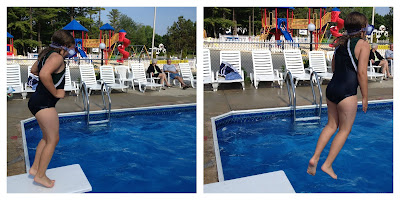 UNTIL!!!! Someone left behind some poop (yup you read that right) in the pool.  The pool was evacuated for hours so the staff could clean it all out.  There is another pool but it is the kiddie pool and no diving board.  But still the kids would not leave!

THEN as soon as we get back to the campsite we get a call that my father in law is ill and on his way to the hospital.  So we jumped in the truck to get home (more than three hours away).

What an interesting day.