Not really!  About a year ago I got in a small accident at work.  Technically it was my fault but you can ask anyone that works with me – it is just not safe trying to get out of our parking lot.  All in all though the accident wasn’t too bad.  I had some front end damage.  We fixed most of it but there is a little bit still “broken” in the front.  Just enough to make my car look like it is snarling at you while driving down the road.  I actually like that look – it has grown on me.

But then my car was at a garage for an oil change and the garage burned down – arson.  My car was close enough that the black trim all along the top (which is chrome colored covered in like a black vinyl) melted and peeled up.  It looked terrible.

Somewhere along the way in the last year, two of my hubcaps (cheap plastic things) lost large chunks and split – but they were still on.  Then a couple months ago I pulled too close to the curb and one of the hubcaps rubbed on the curbing – which was under construction at the time.  That hubcap literally shattered into a thousand pieces.

So I started working on it to sell it.  I wish I had taken a “before” photo but I had no idea the changes would be this awesome.  The result is now I don’t want to sell it – isn’t she pretty again?! 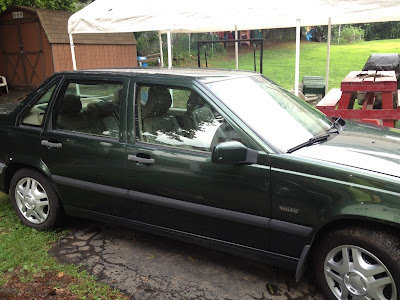 First I gave her a bath – then wouldn’t you know it rained.  Washed her windows…. (Her name is Betsy).

I spent $20 on new plastic hubcaps (for all 4 – what a deal right?).  They aren’t volvo issued but they are new and that works for me. 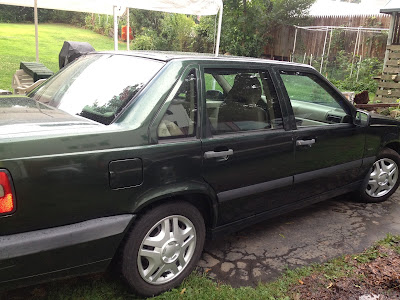 Lastly, and this was my favorite part – the black trim along the top that was melted and sticking up all over the place — I peeled of what I could revealing all of the chrome colored trim.  Then I used extra durable black electrical tape and covered the trim.  It is now shiny and black again. 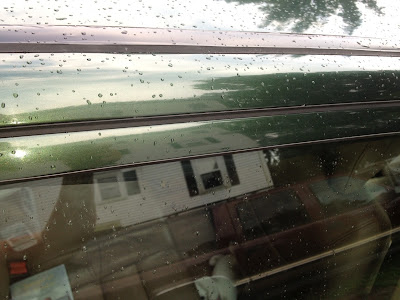 So for $23 my car is good as new except for the snarling face in the front – perfectly fine with me!  Now if I could just find a way to fix the one cup holder in the car.  That would make me very happy.