For those of you that have been around my blog for a while – you know that I have some unwelcome friends in my yard.  SKUNKS! 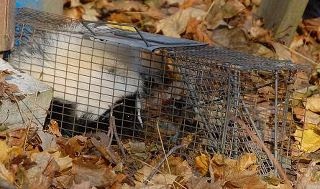 Two weeks before Christmas I had already been sprayed (and my dogs) so many times my husband had no choice but to spend a TON of money to get rid of them.  We apparently had a den under our shed.  The good news is – our unwelcome woodchucks were gone.  But the skunks took up residence.  We went a few months without any then every now and then the dogs and I started getting sprayed again.  It wasn’t a daily occurance but enough that I was not happy.

Before I let the dogs out at night (we have a fenced in yard) – I turn on the spotlights and I sound an air horn.  I then give it a few minutes hoping when I step away if there were any skunks they will leave peacefully.

But tonight I got lazy.  It was raining very hard and I didn’t think there was a chance in the world the skunks were around.  But of course I was wrong.  As soon as I put the dogs out they started freaking out.  Without even giving it a thought I went outside and yelled at them to get away from the wall and settle down.  OOPS!  Too late.

Now I have spent two hours scrubbing myself down with my concoction to remove the odors.  It works but I am never happy at having to go through the process.  I definitely don’t do it for the dogs.  Xenas hair is so thick – we have tried before and even after spending 8 hours scrubbing her down over and over she still smelled.  So when they get sprayed they stay in the basement at night.  No help for it.  But I am definitely not sleeping in the basement and sometimes I get sprayed before going to work – I can’t go to work smelling like a skunk!