StumbleUpon
We finally broke down and took the kids to a water park.  It was a perfect weather day and the place was very sparcely attended!  It was an awesome day for all.  The kids went on anything they wanted and never had to wait more than two minutes in any line – if at all.  Who could ask for more! 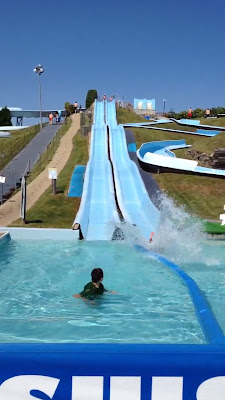 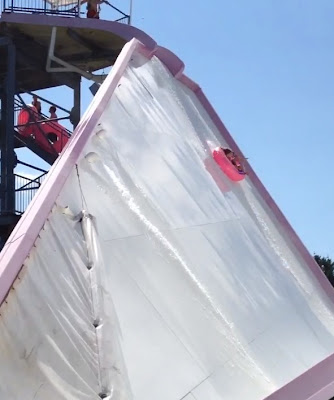 This ride was an extreme ride.  That drop is almost straight down then it goes right back up (like a “V”), until you are funneled out.  Sephora was desperate to try this and when it was too late I realized just what I was letting her do.  I had visions of her letting go of the tube and flying right off the edge.  I would not let her do it a second time.  But the first time – she said was amazing.  That is her and her tube coming down the first side.
﻿ 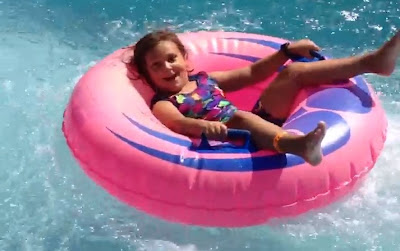 This is her as she is shot out of the funnel – very clearly alive. 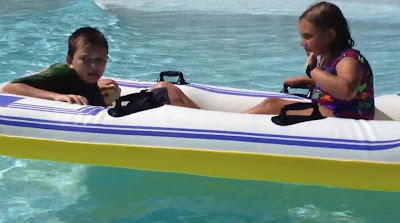 Just hanging out on a three person tube in the wave pool
Notice – no photos of my husband or I?  Somewhere between my childhood and this trip everything that I used to find exciting and exhilarating -is now simply TERRIFYING!  First I tried a water slide – never been a problem before.  One trip down and that was it – never again.  Total panic.
But don’t worry – there was still the Wave Pool.  How much can happen there?  Well, Sephora (who can swim) was pulled by the current and could not swim back into a safe zone.  I thought she was kidding so I went to get her but I had all I could do to get back – I tossed her up against the wall so she could “spiderman” her way back and I could focus on swimming my toukis back!
I seriously have no idea when I became fearful of EVERYTHING – but I apparently now am. I am now very in tune with my own (and my family’s) mortality. 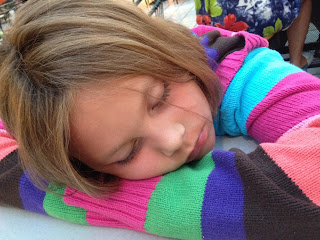 After the waterpark she took a nap and we went out to dinner.  She was clearly still tired – she fell asleep as soon as she finished eating – right at the mall 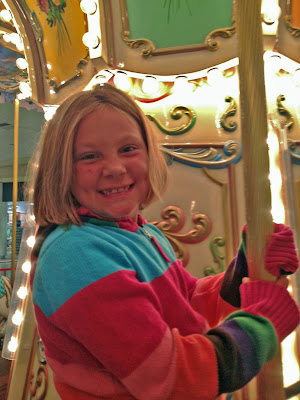 Sephora on the carousel.  I didn’t get a photo of Anthony because he was on the opposite side of the carousel.  I was sitting beside Sephora.  She had just woken up and really wanted me to ride with her 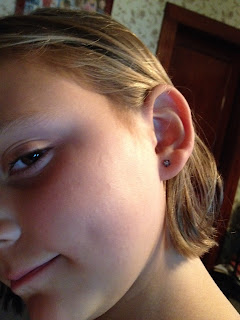 This photo is from the next day.  Once she woke up she desperately wanted her ears pierced – which she had been asking for.  I kept putting her off and told her it hurts.  Didn’t matter she wanted it done.  Well, I definitely couldn’t take a photo that night!  She was screaming and crying to take them out.  After some tylenol and a good night’s sleep (yes she did sleep) – she is now happy and loves how pretty they look on her.  So if anyone needs to know what to get her for Christmas – earrings are a good option!