We camp full seasons at a time and with kids, bikes are an absolute necessity.  Plus our campsite is 1/2 mile from all civilization – we can walk it but so much more fun to bike it.

Of course we do not put the bikes into the camper after every weekend.  That would track so much mud and other debris in (leaves at this time of year).  We keep them all outside until the end of season – then they are stored in the camper for the winter months.

I have tried many different methods for covering the bikes such as tarps – doesn’t work as well as I would like and does not provide absolute coverage.  Bike covers – covers specifically designed to cover bikes are so flimsy and cheap and rip easily AND are not designed for the larger bikes.

Here is what I have been using for a few seasons now.  Extra Large grill covers.  Two of them I purchased from Walmart for the smaller bikes.  They are like a really sturdy canvas with a plastic liner.  They work perfectly.  They were a little two small for Bill’s bike and my bike.  Those grill covers I got from Cabelas.  They were the same price as the ones from Walmart (not inexpensive but totally worth it), larger and much nicer.  These are like a heavy duty canvas with a rubber liner – no water is getting in there.  And on both ends there is a zipper and velcro to tighten it right up.

When I went to Cabela’s I asked them where to find grill covers.  They immediately started asking me what kind of grill I had.  My immediate response was I have no idea – because I don’t.  But then I felt stupid like I had fibbed and couldn’t muster up the nerve to tell them it didn’t matter what kind of grill I had because I was using it for a bike…  I did eventually make it to where the grill covers were and I really couldn’t figure out why the sales associate was asking me twenty questions.  They came in big or bigger.  Hmmm…. I grabbed two of the bigger. 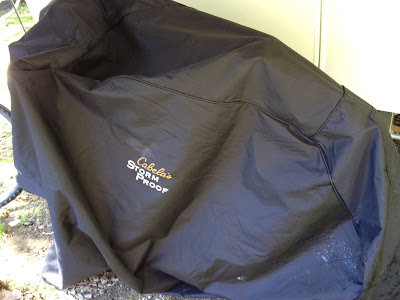 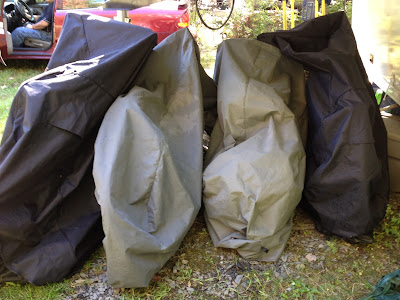 See, they cover every inch of the bikes right down to the bottom of the wheels.  Safe and sound.
Now what else do we use grill covers for?  When camping we leave a tv outside all season long on top of a chest (which you can see  HERE ).  We don’t bring it in – we simply keep it covered with a grill cover.
What else?  You know the generator we all had to rush out and buy after that really nasty winter season a couple years ago (along with the roof rake) – well you have to keep that covered outside so a grill cover is perfect for that.  (You all know not to run a generator in the house right?  Or too close to the house? – Just making sure!)
Share