There are several different versions of this floating around Pinterest but this is how we did it.  I love the cookie cutters with the rubber handles.  They are large and very useful.  I posted a while ago about how I use them for my kids sandwiches – who doesn’t want a Frankenstein shaped sandwich?

Anyway, for today we are carving pumpkins.  Now before we get to the pumpkins let me just tell you about the process.  First, I had to buy two pumpkins (since we don’t grow them in the garden).  When I went to Walmart I grabbed two pumpkins from one of those very large cardboard boxes just as you enter the store.  As soon as I did so, a store employee came over to me and “whispered in my ear” to go over to produce and get them instead.  He said in the produce area they are only $3, while the two that I grabbed were $8 each.  He said they are priced differently simply because they are from different farms.

So let me ask you all – is a pumpkin a pumpkin or are there different types of pumpkins?  Because of course I switched my purchase to the $3 pumpkins.  I am not sure if that is where my difficulties started or if it wouldn’t have made a difference.

Before I tell you how we did it – I have carved pumpkins before.  In fact, pretty much every year.  It is a messy job but not backbreaking.  These two pumpkins were going to be the death of my.  Thank goodness my husband came along and eventually took over.  The guts of these pumpkins were like concrete.  I scraped my fingers raw just trying to get all that stringy stuff and the seeds out.  We broke every carving tool we had and even a blade.  So would the process have been better if I purchased the other pumpkins?  I just don’t know.  My thinking is that they were just not ripe enough and we were cutting into them so early into the season.  At least that is what I am telling myself.

Now onto the process –

Gather up your pumpkins and cookie cutters and a hammer.

Then simply (this was the simple part) just choose spots and start hammering those cookie cutters into the pumpkins.  They will be wedged in there really hard.  I was able to get them out with my fingers but perhaps that contributed to how sore they became.  You may be better off using a pair of pliers to remove the cookie cutters.  We were using Frankenstein, a pumpkin, a ghost and a skull cookie cutters. 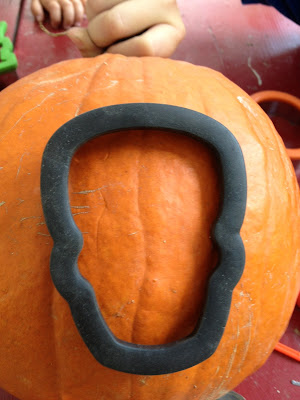 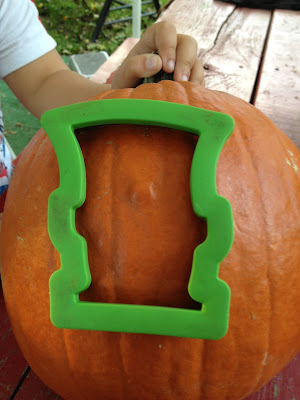 Once you have all your shapes cut (we did not pull the sections out yet) – I cut a circle around the stem to pull off the top and scrape the guts out – yeah that was the process that was nasty!  Once we scraped it out then we just popped the cutouts out.  They popped out very easily.
﻿ 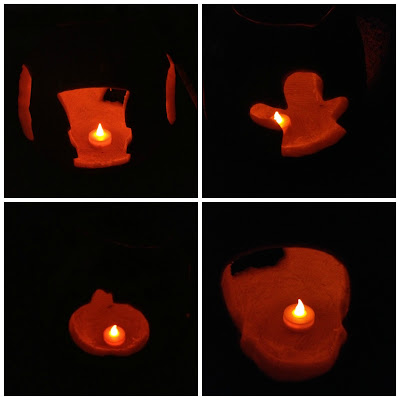 Thank God my husband came along and finished scraping out these pumpins!
Share