Remember this photo when Sephora had just gotten her ears pierced? 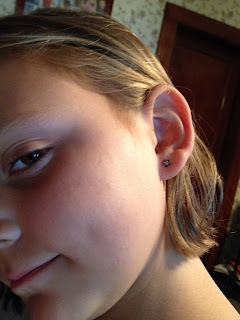 Well it is six weeks and the moment Sephora had been waiting for – the whole reason she wanted her ears pierced!  She wanted to wear Halloween earrings for the big weekend at the campground.
That didn’t quite work out though.  Did you know the gun pierced earrings have a locking back on them?  Did you know they are nearly impossible to get off?
It took my husband and I three days, lots of tears and crying, and vaseline – to get those crazy things off.  I don’t know who was more upset about it – Sephora or I.  I researched and researched and so many other people struggle with this too.  I totally understand some mechanism so that kids can’t randomly take them off after you go through all the trouble to get them.  But really?  Modern technology should be able to come up with some sort of emergency release mechanism.  Had I known it would have been more traumatic to get the backs off than it was to get them pierced in the first place – I can tell with you with 100% certainty we would not have done it.
Thankfully my husband did eventually get them off and she is now wearring some attractive tiny dangling hearts from small (fake) diamond studs.  We can now move on and ahead but holy smokes – never again!﻿
Share