A Blast from The Past

While at swimming lessons a while ago my daughter was questioning just what was something she was looking at.  This is the same facility that I went to when I was a child and not much has changed since then.  When I turned to see what she was pointing at – it was an “old fashioned” rotary dial pay phone.

I tried telling her it was a phone – she vehemently disagreed by holding up my iPhone, insisting that “this is a phone – that is definitely NOT”.  Hmmm.  A woman witnessing this encounter was visibly enjoying the interaction and clearly wondering just how I was going to get my child to make the connection. 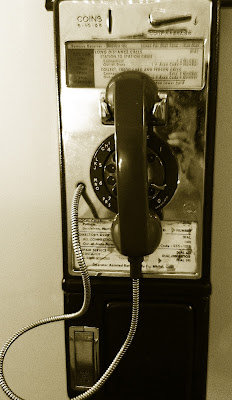 My daughter did agree that the handset – though large and archaic – did resemble something she should speak into.  But why was the phone half the size of her?  In her world – phones fit in the palm of an adult’s hand.  And how do you make a phone call – there are no buttons?

I lifted the handset and started to dial the rotary dial.  I actually don’t even know if the phone works but I should have put my $.05 in (LOL) to see if it still does.  It took forever to illustrate how to dial our phone number.  She was flabbergasted that it could take almost a full minute just to dial our phone number.  I did tell her – to be fair, way back in the day – we didn’t dial ten or eleven numbers, just seven.  And sometimes you could just dial five if you were in the correct locale.  Back then you didn’t dial eleven numbers unless you were making an international call. She loved the noise the rotary dial made when ticking clockwise then counterclockwise back to its “home” position.  I told her it was huge when we eventually switched to push buttons with “tones”.  We had to go from rotary dial (residential or pay phone); $.05 per local call on a pay phone to $.75 to calling card only phones; to push button “tone” phones; to wireless phones; car pack phones; analog cellular phones; digital phones and now smart phones.

That whole discussion made me feel very old.  Now my seven year old has an iPod with many “phone like” capabilities.  She can call me, email me, text me – pretty much whenever she wants.  Plus it can act like a computer – that should be a whole different post.

How different my college experience would have been if I had a cell phone and didn’t need to use a pay phone.  We would stand in line and wait for our turn and you couldn’t talk long because it was too expensive and the line would become an angry mob.  And if my parents called me on the pay phone – whoever was walking by would answer it and I would NEVER EVER get the message.