Then in October came Andrew – exactly a year ago from now – half the state lost power for another week and again so much damage.

The year before we were hit with a horrendous winter where snow rakes were being sought after like they were first issued Cabbage Patch Dolls or Power Ranger Figurines.  We had major roof damage due to those winter storms.  I was always hanging out the windows (four stories high) trying to clean off our roof – obviously not with huge success since we had to rebuild part of the top floor and its structure.

And the year before that – same exact thing – lost the same part of our house due to winter storms. 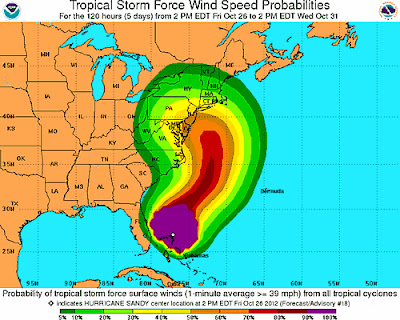 We are in the path AGAIN!  We still have damage to the house that has not been repaired.  There are still broken limbs hanging over the back of our house.  Our flagpole ended up so uprooted from the ground we are no longer able to hang a flag on it.
Fortunately, our neighbor cut down and removed his tree that was just about to fall over and somehow survived the storms last year – well mostly.  It lost plenty of limbs that fell on our house and broke our fence and gate.
And not only is this storm (Sandy) supposed to hit here but it is supposed to hit up North where our camper is.  It would not be good to suffer major damage in two locations.  Not to mention two weeks ago – the camper encountered it’s first earthquake.  I haven’t seen it since the earthquake but I do hope it is still all together.
The emergency preparedness is becoming so much of  a routine – we have picked up gallons of water, bottles of water, gallons of milk, peanut butter, bread, crackers, medicine, dog food, batteries, flashlights, extensions cords (since this time we have two generators), pouches of tuna, ice, coolers, vehicles are gassed up, pulled some cash from the bank for an emergency etc…
Are you prepared?
﻿
Share