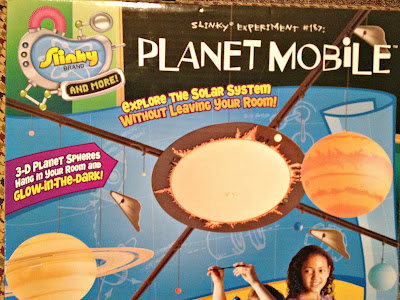 This mobile is designed for ages 8 and up.  The entire project was a great learning experience for my kids.  The instructions not only walk you through the “building” of the solar system but also teaches you about each planet’s composition, placement, and other characteristics while you are constructing the model.  The strengths of this project lie in the educational aspect of learning about the solar system.
A couple items to note – I found it easiest to actually have plastic model glue on hand to glue the pieces together as we went along.  Prior to using the glue – the pieces kept slipping apart.  So we put the project away for that night and resumed tonight armed with glue.  That made the process rather frustration proof at that point.  I also chose to use black thread instead of the plastic string that was in the box.  That substitution was simply a personal preference.
So far – as you can see in our photo – we did not hang the comets on it.  We have them because we will be moving the mobile between the two kids rooms (so they don’t fight over it) and one child wants comets – one doesn’t.  Surprised?  Not me. 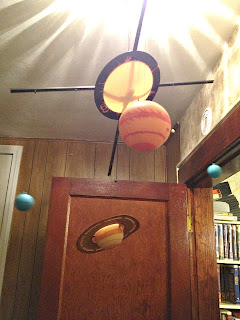 Give The Gift of Slime