Back To Couponing – Survive the Fiscal Cliff Series 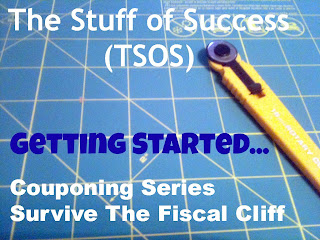 My New Year’s Resolution is very clear this year!  Get back into couponing asap in order to deal with the nation’s economic crisis and how it is impact our family and others.

Many of you know I love coupons.  I have taken a break from them for quite a long time.  I had more than enough of anything I needed stockpiled for at least a year; toilet paper for two years and three years later I still have many items still in my stockpile (not food as that would have expired – but health and beauty items).    I actually still have probably enough laundry detergent for another two years.

However, I had to take a break for so many reasons but the greatest reason is my son.  Long story but it was simply too much of an impact to his life (autistic).  I do think we have moved beyond all that – he is older and developmentally farther along.  I have prepped him for our return to couponing and he appears to be ready to handle it this time.  Now, we are to a point – like many Americans – where couponing will become a necessity.  But more than that – I feel I have an obligation to do it.  It teaches my children how to survive if times get tough in their lives.  It also is a way to teach my children to give to others.  When we coupon, we are able to help so many more people than we would otherwise have been able to.  And as this economic crisis continues to take hold – more and more people will need help.

So what have I done to prepare?

First, I have re-subscribed to RefundCents.com – an online subscription.  I feel this subscription is vital to my success as a mom and a couponer.  First of all they do a great deal of leg work for me – matching major circulars to coupons.  They also have a huge coupon database – if there is something I need to buy and don’t know if a coupon exists – just search for it in the database and if a coupon exists it will tell me where, when and for how much.  But the most important feature of this site is the forum – where couponers around the world let other followers know what deals they may have stumbled upon.  This is where you will not only find the coupon match-ups but the best of the best lead you step by step through deals that may include price matching, refunds etc…That was so extremely helpful one Christmas.  It was one of my kids best Christmas’ ever and it was the one I probably spent the least on.  If you too wish to subscribe to RefundCents I would appreciate if you could list my name as the referrer – Athena Nagel.  I am also (and always have been) subscribed to www.livingrichwithcoupons.com .  That has the largest directory of stores and matchups that I have ever found – and FREE.  It doesn’t take the place of RefundCents because it doesn’t have an interactive  forum but with or without RefundCents it is a valuable resource – and make sure you have it delivered to your mailbox (both actually).

Second, I re-subscribed to American Consumer Services to receive 40 inserts (P&G, SmartSource and RedPlum) every two weeks.  This stops me from needing to buy multiple newspapers when all I really want is the coupons.  But more importantly the inserts are from all around the United States so it affords me the opportunity to have coupons that are not available in my area.  Some people resort to dumpster diving and other methods to obtain their coupons but given my career I cannot be dumpster diving.  Please know though – if I did not have the career I have, I would be in those recycling dumpsters for sure.  You can subscribe to receive inserts from American Consumer weekly, every two weeks or monthly.  Three years ago I was doing weekly but this time I will start bi-weekly.

I will have a coupon series to tell you how I do it and what steps I have taken.  I will not become a coupon site – I can refer you to those places.  So my process may be slightly different for you depending on the stores you have access to.  But I will prove to you that it can be done.  My husband has never participated in my couponing but he also doesn’t want his quality of living to change so I have no doubt I will have his help this time.  He is anxiously waiting for me to begin again.  He knows it works – though he was skeptical at first – and since I have stopped he has been after me to start doing it again.