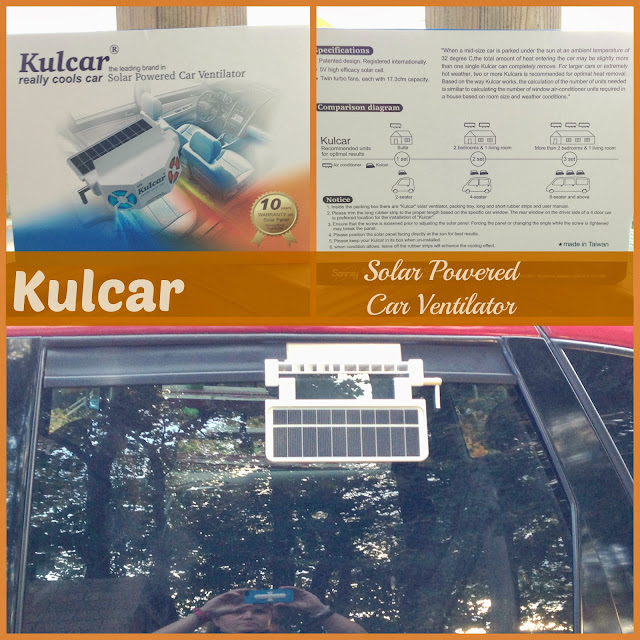 The Kulcar Solar Powered Car Ventilator is a really unique product that I had never seen before.  Its design is patented and registered internationally.  The device has a 5V high efficacy solar cell with twin turbo fans designed for total air replacement in the average car every 90 seconds – it is a highly effective solar car cooler.  By not using the air conditioner in your car you will be reducing your fuel consumption while still giving added car cooler comfort to all passengers in the car.  When your car is under high heat situations such as during the summer months – hazardous fumes are emitted.  This device removes the hazardous fumes from the car making it even safer for all occupants.

Installation of the Kulcar solar cooler device was pretty easy.  The instructions were very easy to understand and they were printed in English – which is a huge benefit.  Although, truth be told – I really didn’t do much with the words, the pictures were very easy to follow.  Simply flip that solar sensor up to gather up energy from the sun and then the fans will start running in a little bit.

When the temperature exceeds 65 degree Celsius, harmful fumes will like methyl, acrolein, butanone, toluene, benzene, propyl benzine,etc.,are released from a car’s interior materials.  These compounds are all known to be cancer causing poisonous chemicals.  The Kulcar Solar Powered Car Ventilator removes those harmful chemicals from the car.

I highly recommend the Kulcar solar car cooler in warmer weather.  I don’t know about you but on top of the other issues – I hate trying to get into a car that is 115 degrees inside after a hard day at work.  I would much rather have it already cooled down.  I can’t tell you how many times my children have cried while waiting for the temperature of the car to cool down.

You know what I immediately thought of when this began working?  How about all those babies or pets that die in cars because people underestimate just how hot it will get in the car.  If they only had this device – lives would be saved!

Here is a short video of me showing you just how easy it is to install the Kulcar device and what it looks like from outside and inside the car.

Read all about the Kulcar Solar Powered Car Ventilator HERE.