Coins on Graves – What it means… 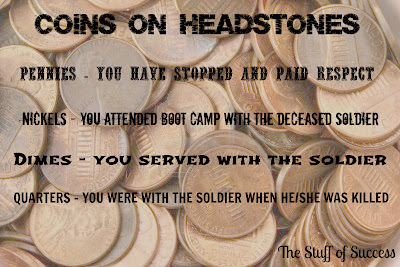 Have you ever noticed coins on headstones when you have visited a cemetery?  You will find them on certain headstones.  The coins have definite meaning especially when left on the headstones of people who gave their lives while serving in America’s military.

The coins serve as messages to the deceased soldiers’ families.  A message that someone else has visited the grave to pay respect.  A penny simply means that you have visited and lets the families know that someone has simply stopped to pay their respects.

Nickels indicate that you and the deceased had trained at boot camp
together.

A dime means you served with them in some capacity.
A quarter indicates that you were with the soldier when he/she was killed.

According to tradition, the money left at graves in national cemeteries and state veterans cemeteries is eventually collected and the funds are used to maintain the cemetery or paying burial costs for indigent veterans.

Perhaps even Buy challenge Coins to be left as a way of preparing to have fun!

During the Vietnam War a coin was viewed as a practical way to communicate the visitation rather than contacting the soldier’s family.  The Vietnam War caused major political division and this anonymous coin “gift” avoided uncomfortable arguments.

Alternately some Vietnam veterans left coins as prepayment of buying a beer or playing cards upon being reunited.
The tradition of leaving coins on the headstones of military men and women can be traced to as far back as the Roman Empire.
Share