The Nike Fuel Band – Nike+ and My Experience 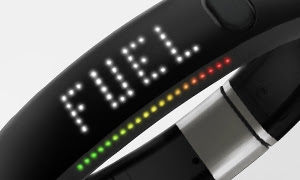 I will start by saying – this is not a sponsored post.  Just information I am dying to share.  I am not even an affiliate of Nike.
The photo above is the Nike Fuel Band.  Over the years I have tried so many pedometers – either I lose them, forget to use them, throw them through the washer – you name it.  Then I bought the BodyBugg – which I will say I loved and the data produced was awesome to see and it easily tracked growth and more.  However, the BodyBugg always left my arm blistered and I needed to pay for an annual contract for the online services.  It is pretty useless without that contract.  So once my contract expired I let it go.  I did eventually by their new enhanced model but again – let it go after the contract expired.  Sad… Next I went to the Fitbit.  I like the Fitbit but stopped using it because my husband lost his – I gave him mine.  Next I bought the ActiveLink.  But it only works through Weight Watchers and I wasn’t doing Weight Watchers.  So I paid for their program and paid the additional $5 per month for the ActiveLink.  I used it religiously but the expense just didn’t make sense.
A few months ago I learned that Fitbit was coming out with the new Fitbit band in the spring.  I have been waiting and waiting.  Spring arrived a month and a half ago and still no word from Fitbit about the  grand arrival of their product.  No response to emails.  No newsletter updates.  Nothing.  Silence.  UPDATE – Okay so as soon as I typed up this post I received an email that limited supplies of the FitBit band are now available… BUT within 10 hours they are no longer – the site now says it may take 6-8 weeks for delivery.
Frustrated and growing more and more impatient I started searching for other companies that may be making accelerometer wristbands.  I found several and after researching each I opted to get the Nike Fuel Band.  I have had it for a week and am not at all disappointed.  It doesn’t have a ton of bells and whistles but it does everything I want – which isn’t much.  I wanted a band that counts steps, calories and can also display time.  My intent was to eliminate wearing a watch.  That didn’t quite work out.  The Nike Fuel Band does all those things but the display is very bright.  Call me Vain but it is a little embarrassing to display the time with this bright LED display.  So I still wear my watch.  Shipping was very speedy – no complaints at all.  The band comes in black or white.  At first I thought for sure I would get white – it is actually awesome looking.  But then I read reviews and a very common complaint is that the white gets grungy looking very quickly and nothing users try to use to clean it works.  I bought black… The band comes with links to insert if you need it to be larger or remove them to make it smaller.  I need it without the links.  It is nowhere near being snug but no matter how hard I try I often (at least half the time) pinch my wrist when I try to close the clasp – and boy does that SMART!  The band has some calibration called Fuel – hence the name.  I don’t quite understand the Fuel but it seems to convert activity into some sort of fuel calculation.  Supposedly you can compete with other band wearers with your levels of Fuel.  At this point I feel that calculation is useless but maybe I will learn more about it as I use it.  To charge the band or sync the data – you can either use the adapter and plug it into a USB port or plug the band directly into the USB port.  On the surface that sounds great but when I plug the band directly into the USB port it presses down on the keyboard and keeps making strokes not allowing the software to open.  There should be a better way to get it to work in the USB port of a laptop without impacting everything else.  That is a huge frustration.  Having said all that though I believe the product is still awesome and that bands in general just have a little bit of progress to make.  It is water resistant – not waterproof.  I don’t think any bands are waterproof yet but maybe they will get there.  I know one claimed it was and it really wasn’t so they had to pull their product from the market, engineer a new model and now they say it is water resistant.  The online software allows you to share your achievements directly on Facebook and/or Twitter – which I am not doing.  You can set a Fuel goal but I would prefer to set a number of steps or number of calories goal – if I can do that I can’t find out where – but I don’t think so.  It has an accelerometer that tracks almost all types of activity.

Now I have noted many things that could be better or aren’t quite what I would prefer.  But I can tell you I am not at all dissatisfied with my purchase.  It is pretty comfortable, easy to read, instant data, and not as overtly visible as things like the BodyBugg. I would have preferred white but just like a white wristwatch – it would never stay clean and I just can’t have that.  Out of all the band options the Nike Fuel Band is the most attractive option.  The Fitbit band is not more attractive but it will come in more colors – but they will most likely have the same cleanliness struggles.

Again – this is not a sponsored post but it you would like to check it out for yourself – http://www.nike.com/us/en_us/c/nikeplus-fuelband .