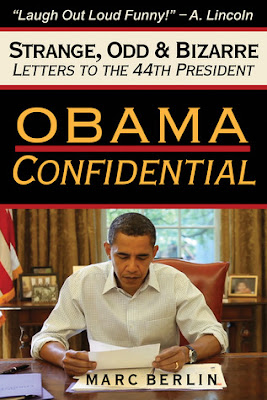 In this outrageous collection of “letters” to the 44th President of the United States, Barack Obama, we’re offered a startling inside look at what’s on the minds of Americans today. From celebrities as diverse as Warren Buffett, Bill Clinton, and Steven Spielberg, to anonymous everyday citizens like the minimum-wage waitress in Oklahoma and a dry cleaner named Al Kayda in Wisconsin, Obama hears it, and gets it, from everyone. And when you’re the president, absolutely no subject is off-limits. An ex-student in Illinois is drowning in an ocean of debt; a harried housewife in Wyoming has dubious ideas about how to save hard-earned pennies; while a gun owner in Tennessee vigorously defends his right to bear arms. Even a Harvard classmate re-appears, with a not-so-subtle demand for money. Obama, who’s obviously a very busy man, sometimes answers with a brief innocuous letter of his own. Echoing another classic of U.S. history, Alexis de Tocqueville’s ‘Democracy In America’, ‘Obama Confidential’ offers a vivid, consistently amusing snapshot of America in the second decade of the 21st century, with hilarious results.
Marc Berlin is an author and satirist. His newest book of political humor, “Obama Confidential: Strange, Odd, and Bizarre Letters to the 44th President” is due to be published July 4th, 2013. He lives in Massachusetts.
*****************************************
This book was great and quite entertaining.   The stories people tell in these letters are amazing.  I love that it is a book that I can pick up and read a bit anytime I want.  I can open to any page and still be quite entertained.  It doesn’t matter whether you support Obama or not.  In most of the letters it doesn’t matter who is sitting in that presidential position.  The entertainment is from the people that wrote the letters, not the person who was to receive the letters.  The letters are meant to be hilarious, satirical and entertaining.  I give this book 5 stars and will definitely be re-reading some of these letters.  Many of them are so hilarious.
I received a copy of this book in exchange for an honest review.
Share