Recently I found a homemade bow and arrow set on Pinterest (SOURCE) .  My kids have been asking for a bow and arrow set for awhile and I have not caved!  Part of the problem is I grew up with bow and arrows at camp etc…  I actually have two crossbows.  So my kids want to go from knowing nothing about bows straight to the crossbows with real arrows!  I don’t think so.

First – just to let them play I made a bow and arrow set simply out of sticks, twigs and twine.  That kept them busy for awhile.  But now I want to make them a set with more tension and capable of much more.  I wanted my design to be a little different from what I found on Pinterest.  Here is what I came up with.

Here is what you need – I am making three. 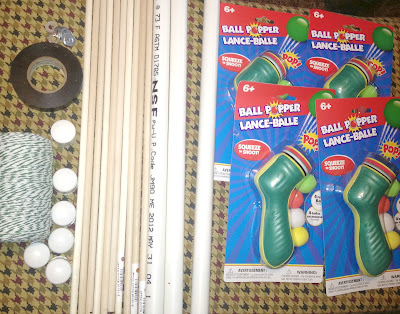 – 40 inch length of 1/2 inch PVC piping.  I bought a ten foot length and just had Home Depot cut it into thirds.  PVC pipe is very easy to cut with a hacksaw but I couldn’t fit ten feet into my car and it was just as easy to have them cut it quickly (for free).  When I got home I used a hacksaw to create a notch through one side at each end.

– I wrapped the center of each piece of PVC with electrical tape to create a nice handle/cushion for the kids when shooting.  The electrical tape was wrapped in several layers.

– I used 17 pound synthetic twine as the bow string.  I tied the first end of twine around a tiny washer and slid the washer into one notched end of the PVC pipe.

– Place a PVC pipe cap over that end.  The washer will keep the string from breaking free and the cap will keep everything very nicely in place.  Cut the string about 2 1/2 inches shorter than the PVC pipe and tie on to another small washer.

– To tie off the opposite end, bend the pipe (I could do this myself by being barefoot and stepping on the middle of the pipe while pulling the end I still need to thread up towards my torso).  It was tricky to do but I threaded the available end of twine through the other notched end (non capped).  Let go and cap.

Your bow is ready!

– For the arrows I needed thin dowel rods.  Those came in four foot lengths – I just used a hacksaw to cut them down to two foot lengths.  At one end of the dowel rod I used the hacksaw to create a small indentation to “grab” the string while aiming and shooting.

I picked up these little foam cut and ball kits at the dollar store.  I threw the guns out – all I wanted was the balls.  I used a pair of scissors and cut the balls in half, then hot glued one half to the other (non-notched) end of the dowel rod. 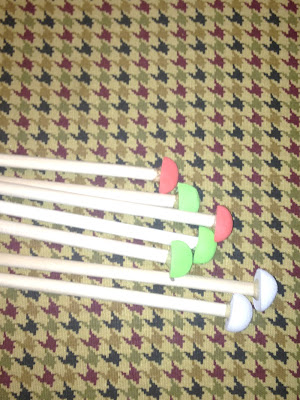 It is raining outside but that did not stop us from testing these babies out.  They are so much more awesome than I imagined.  These two are perfect for my husband and I.  The string is extra tight and the arrows FLY FAR!  The string is so tight though that it is difficult for the kids.  Sephora is getting the hang of it but it takes some true strength.  I may need to make another one for Anthony with the string a little less tight. 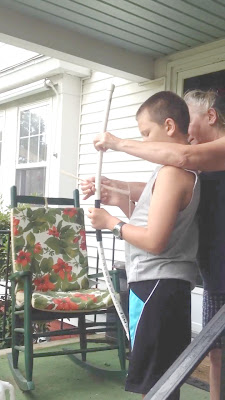 Even meme got in on the action – working with Anthony 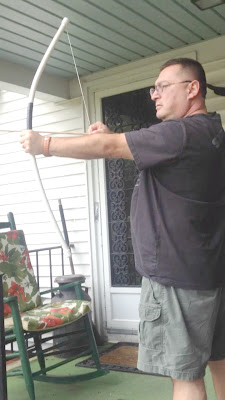 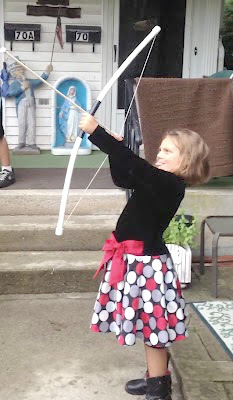 Ready, aim, pull (stick out tongue to help with exertion) 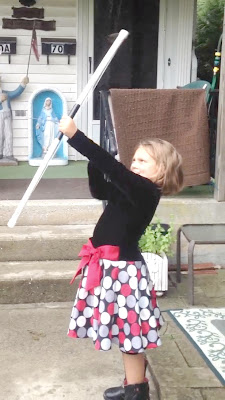 Release!
Look at her in action (below) – she already says she wants to be an archer in the Olympics!
Share