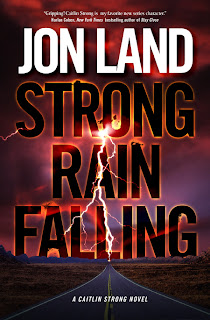 Mexico, 1919: The birth of the Mexican drug trade begins with opium being smuggled across the U.S. border, igniting an all-out battle with American law enforcement in general and the Texas Rangers in particular.

The Present: Fifth Generation Texas Ranger Caitlin Strong and her lover, former outlaw Cort Wesley Masters, both survive terrifying gun battles. But this time, it turns out, the actual targets were not them, but Masters’ teenage sons.

That sets Caitlin and Cort Wesley off on a trail winding through the past and present with nothing less than the future of the United States hanging in the balance. Along the way they will confront terrible truths dating all the way back to the Mexican Revolution and the dogged battle Caitlin’s own grandfather and great-grandfather fought against the first generation of Mexican drug dealers.

At the heart of the storm soon to sweep away America as we know it, lies a mastermind whose abundant power is equaled only by her thirst for vengeance. Ana Callas Guajardo, the last surviving member of the family that founded the Mexican drug trade, has dedicated all of her vast resources to a plot aimed at the U.S.’s technological heart.

This time out, sabotage proves to be as deadly a weapon as bombs in a battle Caitlin must win in cyberspace as well. Her lone chance to prevail is to short-circuit a complex plan based as much on microchips as bullets. Because there’s a strong rain coming and only Caitlin and Cort Wesley can stop the fall before it’s too late.

Jon Land is the author of more than 30 thrillers, including the bestselling Caitlin Strong Texas Ranger series that includes Strong Enough to Die, Strong Justice, Strong at the Break, Strong Vengeance and, coming this August, Strong Rain Falling. This past fall he resurrected his longtime series hero Blaine McCracken in the E-Book Original Pandora’s Temple, which became a bestseller on both Apple and Amazon and was nominated for a Thriller Award as Best E-Book Original. A follow-up, The Tenth Circle, is slated for release in time for the holiday season. Jon’s first nonfiction book, BETRAYAL, meanwhile, was a national bestseller and was named Best True Crime Book of 2012 by Suspense Magazine. He lives in Providence, Rhode Island and can be found on the Web at jonlandbooks.com.

I have read several of John Land’s books but nothing from the Caitlin Strong books.  I love how John can blend fiction with fact; history with present.  It is a very unique ability but one that captures a reader from the very beginning of the story.  Trust me – those first few pages are very important in his stories.  The stage is set immediately and you will never have a dull moment and there are always surprises that leave you gasping.  This is yet another masterfully created suspense filled mystery that is worth every moment of your time!  Five stars again for sure!  Thanks John.

John Land is offering a free eBook copy to one of my lucky readers – enter below.