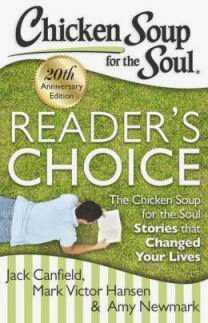 History of Chicken Soup for the Soul

Internationally known speakers Mark Victor Hansen and Jack Canfield knew the power of a good story long before Chicken Soup for the Soul was published. Each had built their speaking careers by telling inspirational, motivational and uplifting stories that their audiences could use to discover, experience and retain key concepts and approaches. After years of continuous audience requests that they put their stories into book form, Hansen & Canfield finally agreed. Rather than focusing only on their stories, they decided to reach out to others and seek contributions of powerful tales of ordinary people doing extraordinary things. After rounding up the 101 most inspirational submissions, they were left with an untitled book they both knew had the potential to make quite an impact.
As they searched for a winning title, Jack & Mark each agreed to meditate on the subject for one hour a day. Jack visualized the image of his grandmother’s chicken soup and remembered how she told him it would cure anything. The book would have the same healing powers as that soup, but not for the body—for the soul. Thus, the now famous title was born…Chicken Soup for the Soul.
Chicken Soup for the Soul was released on June 28, 1993, and became a holiday favorite by the end of December.
Click Here To Read More About The History Of Chicken Soup For The Soul

Twenty years later, Chicken Soup for the Soul and its stories are still changing lives! This special twentieth anniversary collection celebrates the power of storytelling. Readers share their personal, inspiring stories about how a Chicken Soup for the Soul story made a difference in their lives, paired with the life-changing story itself. It’s a double dose of inspiration!

This book is a little different than the others.  They are all stories that are designed to make you feel good and they are so inspiring.  This book is composed of story partners.  Basically an author writes about a story that made a difference in their lives and how it is done so – then the next story is the original story that provided the inspiration.  It is a unique way to present such awesome stories!  Love it!