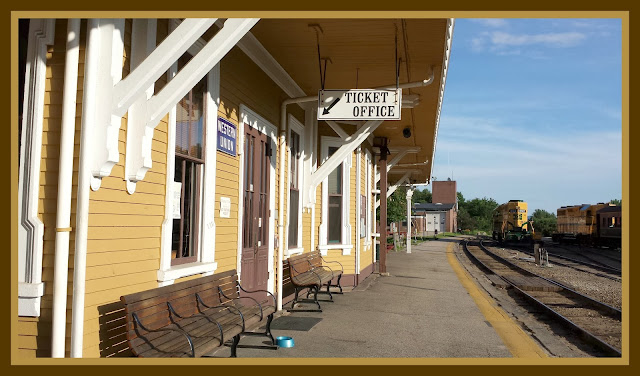 Its History:
Until a decade after the end of the Civil War, stagecoaches were the preferred method of transportation to the North Conway area. The rail line from Conway to North Conway was completed from Conway on June 3, 1872, during the administration of President Ulysses S. Grant and extended to Intervale in October 1874. That same year, the Portsmouth, Great Falls and Conway Railroad built the North Conway station. Noted architect Nathaniel J. Bradlee of Boston designed the beautiful structure, which has ticket office, baggage room and restrooms. Two curving mahogany staircases led to offices in metal sheathed domed towers on the second level. An E. Howard, eight-day clock was installed in the face of the building facing the park. 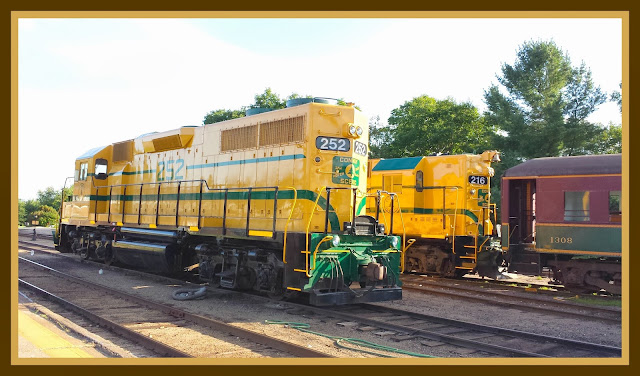 Railroad carpenters had already built several Victorian-style stations along the line prior to reaching North Conway, but the North Conway station was truly a showcase for their craft. The station merited their finest efforts because the town, a prestigious summer resort, served as the northern terminus of the Conway Branch. 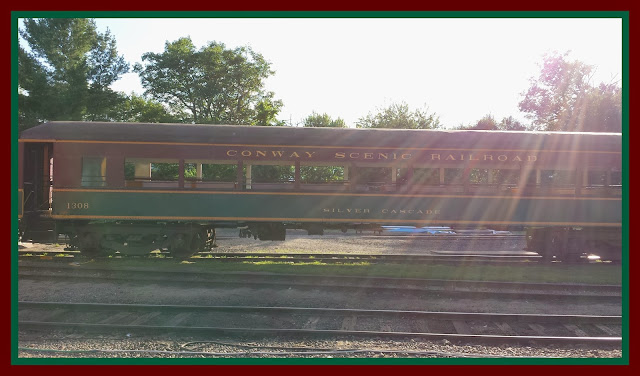 Two years after opening, history was very nearly made at the station. On December 3, 1876, Alexander Graham Bell and his assistant, Mr. Watson, attempted a conversation over the telegraph wires between Boston and the station ticket office, a distance of 143 miles. Although the conversation was not heard by either gentleman it was a start; as they continued to experiment in long distance communication. 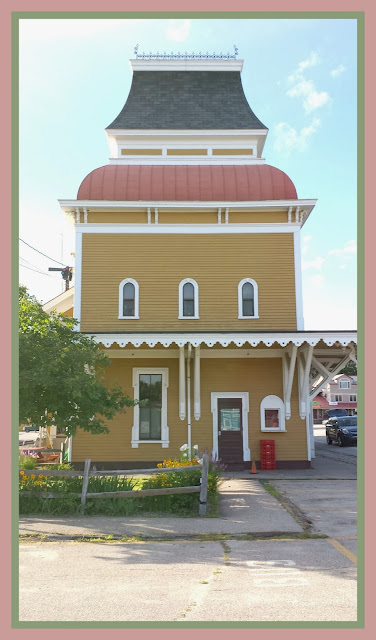 For nearly 90 years the station was a landmark for train travelers. Passengers, mail, express, and newspapers arrived and departed through the station. Snow trains began running in 1932 to the town that was home to the “birthplace of American skiing.” Countless skiers rode the snow trains as the sport of skiing grew with the development of ski lifts. 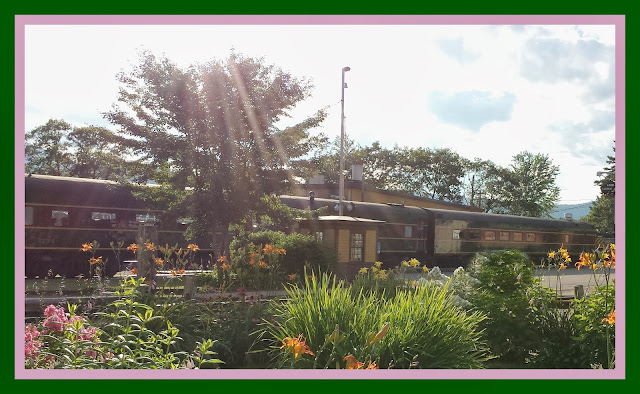 By the early 1950s, improved highways and America’s love affair with the automobile led to a decline in passenger service. Passenger service to Boston ended on December 2, 1961, as a single B & M Buddliner headed south never to return. Freight customers continued to decline, too, and the last freight train departed on October 30, 1972. 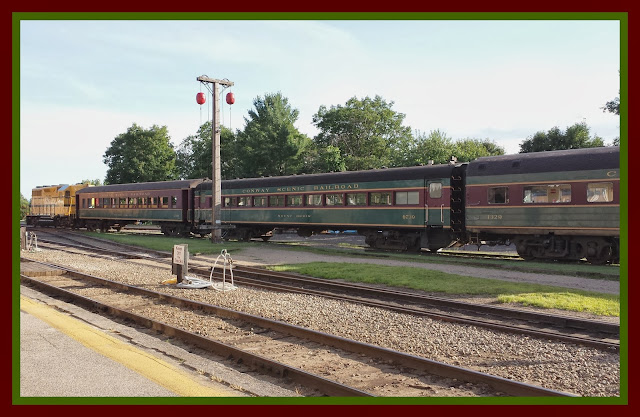 The station remained boarded up and in general disrepair for several years after passenger service was terminated. The Conway Scenic Railroad restored and reopened this magnificent station on August 3, 1974, to provide seasonal excursion train service in the Mount Washington Valley. 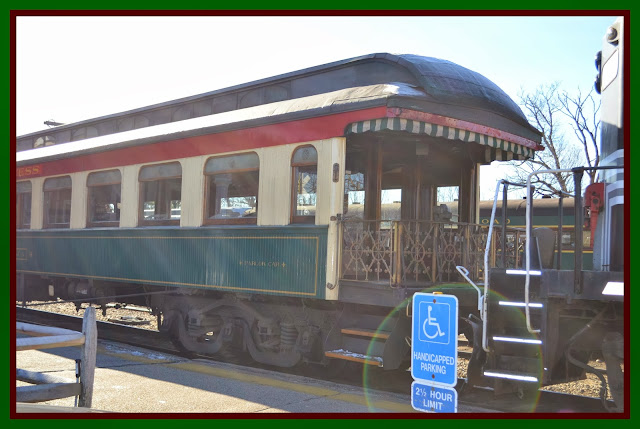 Now a National Historic Landmark, the station still reflects its original character even though a Gift Shop has replaced a waiting room, and there have been upgrades to heating, water, and electrical systems. During the summer of 1996 the station exterior was refurbished to include new roofing, paint, replacement of trim, and repair of the weather vane. To further protect its long and colorful history, a sprinkler system was installed. 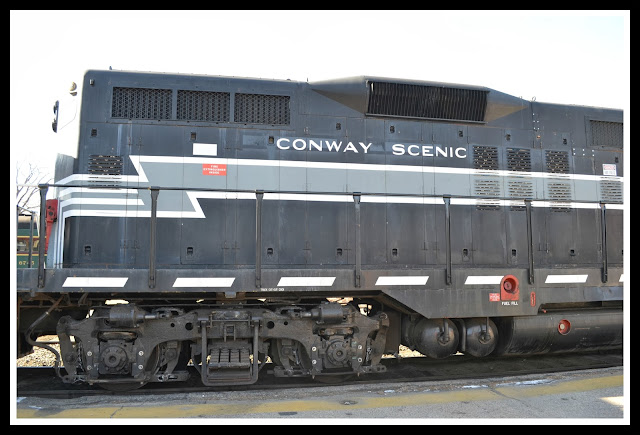 Today, one may board a train in North Conway during the summer and fall seasons for Crawford Notch and beyond. The original line to Conway still sees several trains a day during the operating season. 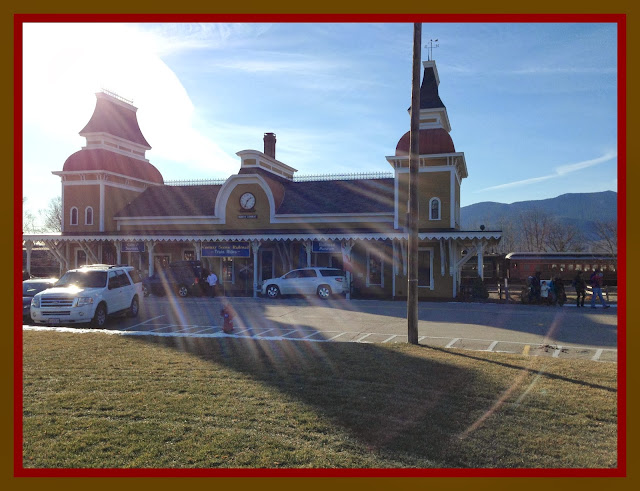 We had the opportunity to check out the Conway Scenic Railroad on November 30th and we chose the Santa’s Holiday Express train.  That consisted of the Valley Train’s 21 mile route – roundtrip Bartlett Excursion.  The trip took approximately 1 3/4 hours with Santa, his elves, hot chocolate and cookies. 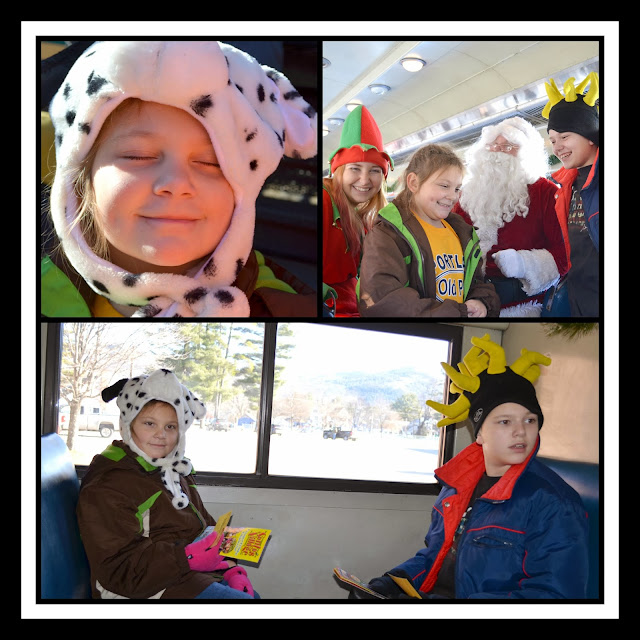 The 21 mile, 1¾ hour roundtrip Bartlett excursion offers a longer and more relaxing train ride that takes you “over the river and through the woods.” You’re invited to sit back and enjoy the passing scenery as you travel through fields and woodlands, crossing the East Branch, Saco and Ellis Rivers on the way to Bartlett. Here you also have the opportunity to watch the locomotive “run around” for the return trip to North Conway.  The view is amazing throughout the entire trip. 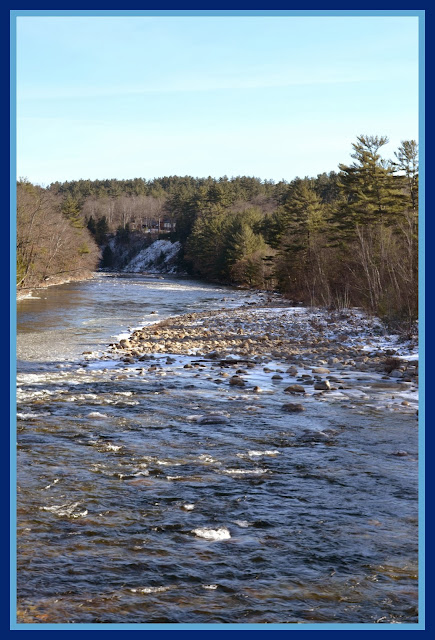 The Valley Train also has The 11-mile, 55-minute roundtrip Conway excursion is ideal for visitors wanting a shorter train ride, especially those with young children. On this excursion, you’ll travel south past the Moat Mountain Range and parallel Route 16 before passing through farmlands and crossing Moat Brook, the Saco and Swift Rivers on the way to Conway. Here, you can watch the powerful locomotive “run around” the train in preparation of the return trip. 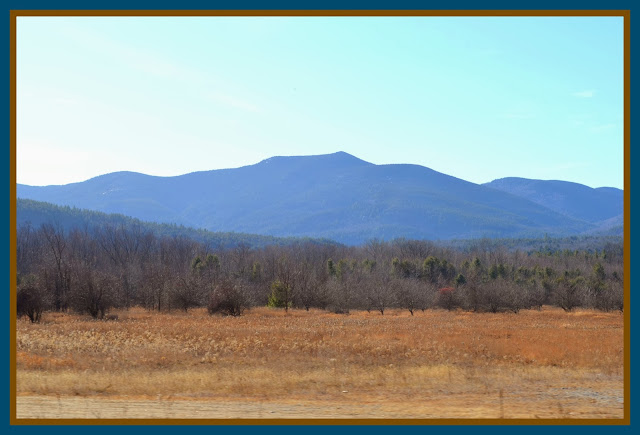 We sat in the very last seat of the train – not realizing that we had the best seat in the house for the middle of the trip when the train did a “round about” – the engine disconnected from the front of the train; came back around and re-connected to the rear of the train (right near us).  We watched as it switched tracks and moved closer.

There are also other train options during the warmer months as well as a dining car, first class etc…

I highly recommend taking the time to go on one of these excursions if you get a chance.  The White Mountains are a sight to see for sure and seeing them from the view of a historic rail car is amazing.  We were even able to see the ski resorts making snow.  We were told the resorts usually would have been making snow by now but because the water levels were so low this was the first weekend they were able to do so. 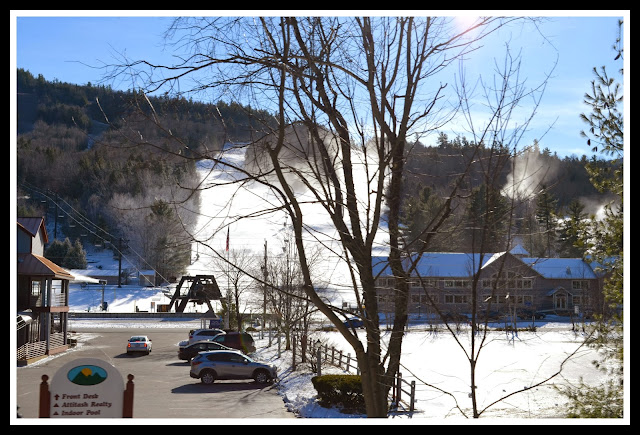 This was such a great experience for our family.  We will definitely be doing it again – there are so many more things in that area that we hope to do in the next year and swinging back to the Conway Scenic Railroad is definitely one of them.  Next time we hope to try the Notch Train!

I received Valley Train Tickets mentioned above in the hope that I would mention it on my blog.  I only recommend products or services I use personally and/or I believe would be helpful for my readers.  I am disclosing this in accordance with the Federal Trade Commission’s 16 CFR, Part 255: “Guides Concerning the Use of Endorsements and Testimonials in Advertising.”  The opinions expressed in this post are entirely my own.  Your experience with the product(s) or service(s) may differ from mine.

Ghost The Musical @HanoverTheatre – YOU MUST SEE IT – Phenomenal!!