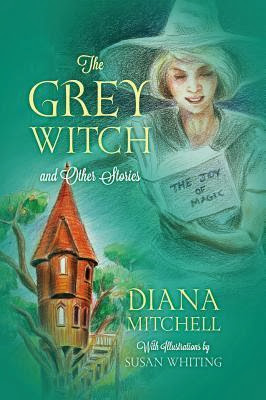 (From Goodreads) Enter a world of magic and mayhem. In the world of the Grey Witch anything can happen, and often does. What happens when a witch tests her spells on her unsuspecting cat, or casts spells to oust unwanted intruders? She turns toys into real creatures and sometimes they are not what she expects. She grows candy apples on trees and turns her cat blue by mistake. One witch makes an unusual flying machine for a little boy’s Halloween treat. Another enjoys water-skiing with her dog and cat. She upends the Coast Guard and confuses the police, but all is well when the blue witch creates magic for the children she loves.

Diana Mitchell was born in England and went to school at Stoetley Hall in Surrey.  She attended college in Godalming.  At age 18 she joined the Women’s Royal Naval Service.  During this time she met and married an American flyer and moved to America.  She now lives in Rolling Hills, California.  She has 6 children, 8 grandchildren, 3 great grandchildren and many pets.

This book is hardcover and classified as juvenile fiction.  The stories include the Grey Witch, Yellow Witch, Orange Witch and Blue Witch.   There are 5 short stories and they are such fun.  The witches are down to earth – mistakes and all – and really just very human witches.  For example in the first story the grey witch turns her cat into a dinosaur.  Chaos at a local school results.  Very interesting stories.  The illustrations are colored pencil type illustrations and capture the story and characters perfectly.  Excellent for all ages and quick.

How I Can Read So Many Books Quickly – And You Can Too!

The Kids Book of Hand Lettering by Nicole Miyuki Santo