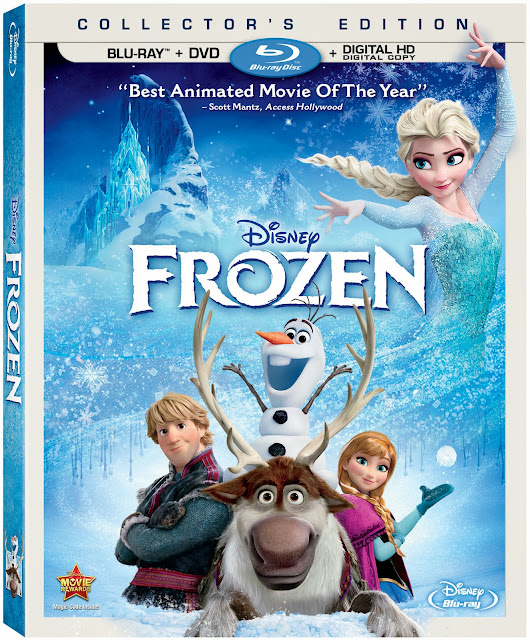 Disney’s Frozen arrives on Blu-ray Combo Pack on March 18th!
Bonus features include original theatrical short “Get a Horse!”, “Let It Go” Music Videos by Demi Lovato, Martina Stoessel & Marsha Milan Londoh,  D’frosted: Disney’s Journey From Hans Christian Anderson to Frozen and more!
Fearless optimist Anna sets off on an epic journey – teaming up with rugged mountain man Kristoff and his loyal reindeer Sven – to find her sister Elsa, whose icy powers have trapped the kindgom of Arendelle in eternal winter.  Encountering Everest-like conditions, mystical trolls and a hilarious snowman named Olaf, Anna and Kristoff battle the elements in a race to save the kingdom.
Bring home Frozen on Blu-ray High Definition – featuring a blizzard of never-before-seen bonus extras with gorgeous animation, memorable characters and unforgettable music.  It’s dazzling fun for the whole family!
********************************************************
We saw Frozen and it was totally incredible.  The animation, the colors, the emotion – all a perfect blend to make this movie unforgettable.  The gowns were amazing, and the ice crystal castle was stunning.  This movie was so much more than we had even hoped for and would be perfect for audiences of all ages.
Share