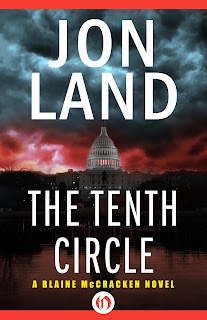 1590: An entire colony of British settlers vanishes from their settlement on Roanoke Island, seemingly into thin air. 1872: The freighter Marie Celeste is found drifting at sea off Gibraltar, its entire crew and passengers gone missing without a trace. But what if there’s a connection between two of the greatest historical mysteries ever? And what if the roots of that connection lie in a crazed plot to destroy the United States as we know it today? Those are the questions confronting Blaine McCracken as he takes up the trail of small time preacher Jeremiah Rule whose hateful rhetoric has done big time damage by inflaming an entire people half a world away, resulting in a series of devastating terrorist attacks stateside. Rule, though, isn’t acting alone. A shadowy cabal is pulling his strings, unaware they are creating a monster soon to spin free of their control. McCracken has just returned from pulling off the impossible in Iran, ridding the world of one terrible threat only to return home to face another. Isolated in a way he’s never been before and now hunted himself, he’ll have to rely on skills and allies both old and new to get to the heart of a plan aimed at unleashing no less than the Tenth Circle of Hell. This as he contends with a failed congressman intent on changing the country to fit his own vision and an Iranian assassin bent on revenge. Blaine’s desperate path across country and continent takes him into the past where the answers he needs lie among the missing Roanoke colonists and the contents of the Marie Celeste’s cargo holds. Those secrets alone hold the means to stop the Tenth Circle from closing. And as the bodies tumble in his wake, as the clock ticks down to an unthinkable maelstrom, McCracken and Johnny Wareagle fight to save the United States from a war the country didn’t even know it was fighting, but might well lose.

Jon Land is the award-winning, critically acclaimed author of 36 books, including the bestselling Caitlin Strong Texas Ranger series that includes Strong Enough to Die, Strong Justice, Strong at the Break, Strong Vengeance and, most recently, Strong Rain Falling. The Tenth Circle marks the second return engagement of his longtime series hero Blaine McCracken on the heels of last year’s Pandora’s Temple which was nominated for a Thriller Award and received the 2013 International Book Award for Best Adventure Thriller. Jon’s first nonfiction book, Betrayal, meanwhile, was named Best True Crime Book of 2012 by Suspense Magazine and won a 2012 International Book Award for Best True Crime Book. He is currently working on Strong Darkness, the next entry in the Caitlin Strong to be published in September of 2014. He graduated Phi Beta Kappa and Magna Cum Laude from Brown University, where he continues to maintain a strong volunteer presence, in 1979 and can be found on the Web at www.jonlandbooks.com.

It is no secret that I love Jon Land’s books.  Although I have not read all of them, I have read many.  He masters the art of suspense and incorporating historical information into his plots.  The Tenth Circle grabbed my interest from the start.  There was so much mystery and suspense.  Jon has a way of making you think and become a part of the story.  I was easily caught up in the suspense.  I give this (as well as some of his others) 5 stars and will continue to read his novels.

I received a copy of The Tenth Circle in exchange for an honest review.

Spaghetti Is Not A Finger Food by Jodi Carmichael