I Will Never Do These Things As A Mom! Yeah Right…. Ten Things! 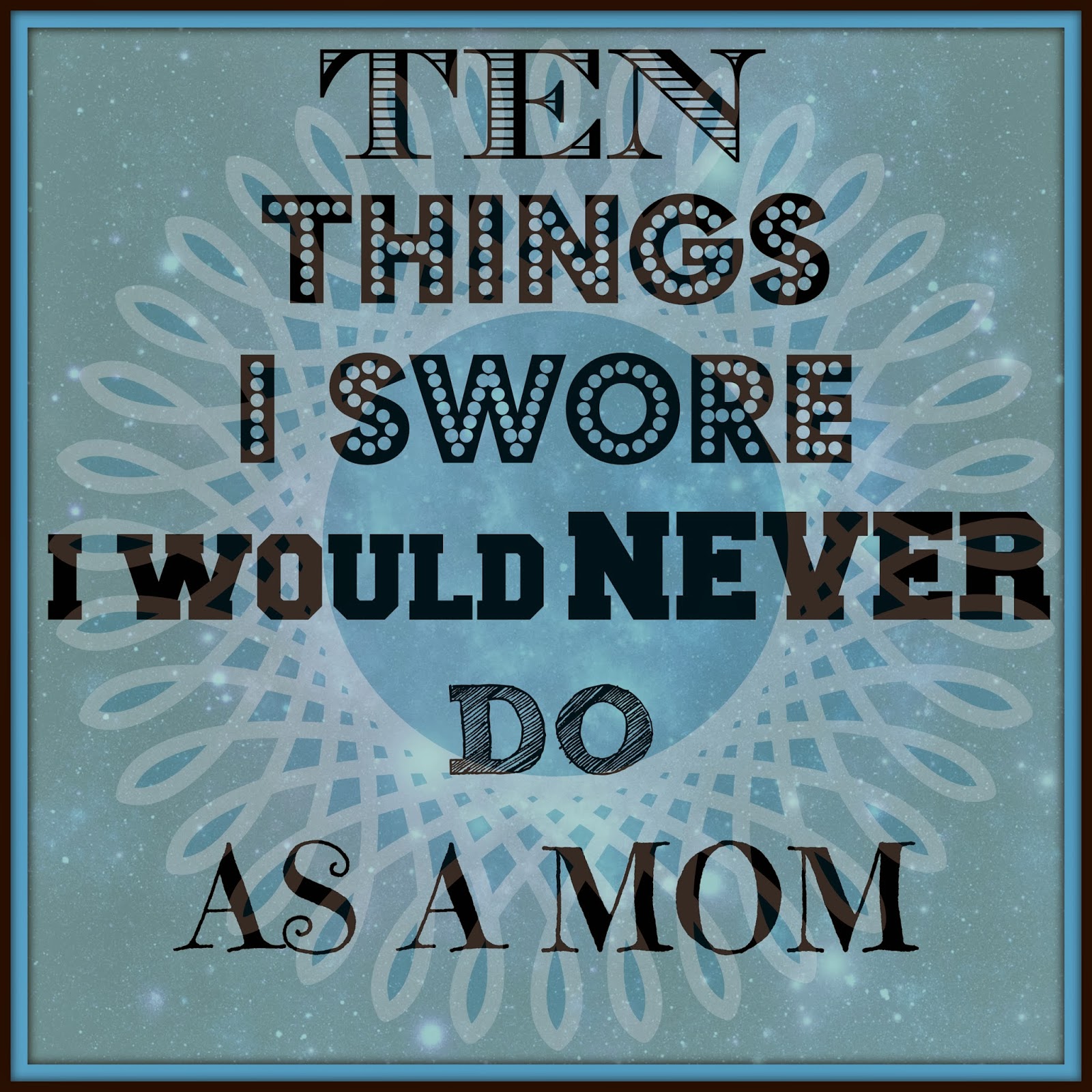 1.  My kids would have clean rooms.
My mom would never have tolerated messy rooms.  I seriously don’t know how she did it.  She worked full time and for a part of my youth she even was attending school in the evening.  Still – she was adamant that our rooms be clean.  For our first three kids I fought the battle.  But with kids from 9-27 I have given up on it in the last year.  These are my last two kids in the “nest” and I don’t need to spend my time freaking out about their rooms.  I do give them constant reminders.  I do go in their rooms every now and then and just start throwing things out.  I don’t freak out about it.  I am sure I give them plenty of other instances of poor decisions to think of me as a crazy mom but this is not one of them.

2.  I would never go to work in the morning with dirty breakfast dishes on the table.
Seriously I do try to make sure this doesn’t happen.  But occasionally buses are missed, homework can’t be found, lunches are lost etc… and that creates so much chaos that we need to just run out the door.  Problem is when this does happen I get overwhelmed walking in the door after work and seeing the mess we left.

3.  My kids would always have a healthy breakfast.
Uh – NO! I want to.  I want them to always eat healthy.  But the fact of the matter is as long as it isn’t candy, pretty much anything is fair game as long as I can get them out the door to school so I am not late for work.  At least once a year I even throw some ice cream in a cone for them and we run out the door.  That is a very rare treat for them.  Funny thing is I do sometimes manage to squeeze in healthy options.  One of our favorites is making frozen fruit ice cream.  No sugars, nothing but frozen fruit through the Yonanas.  Problem is they then go to school and tell everyone they had ice cream for breakfast but it is actually fruit.  See?  I can’t win.

4.  I will never yell at my kids – I am the most patient mom.
WOW!  Did I miss the mark on this one.  For the first two kids I never yelled.  Seriously – never.  Then the third came along and brought with her some extreme challenges.  She taught me everything I know about yelling.  Then the fourth and fifth and we now live in a total state of chaos.  But the youngest two have serious special needs so yelling is very counterproductive.  It doesn’t happen too much anymore.  I still feel like I yell all the time until my stepson moved back in and can’t figure out how we don’t freak out at some of our kids behaviors… I guess we are doing something right.

5.  My kids will never have dirty clothes all over their room.
For the first two – I was obsessed.  I would color code their clothes, put outfits in baggies and keep them nice and neatly placed in their dresser drawers.  Socks were never lost.  They were always dressed perfectly.  When the third came along – I had all I could do to make sure clothes – anyones! – end up in a drawer, somewhere.  Then the fourth and fifth just pushed the notion over the edge.  Now I am happy if their clean clothes are on top of their dresser and the dirty clothes are on the floor.  At least then I can just pick up the floor.  But you know the dirty clothes get mixed in with the clean clothes and who really knows what is or isn’t really clean in their rooms.  Every so often I just grab everything and clean it or re-clean it.

6.  My kids will be awesome athletes.
Five kids and only two ever showed an interest in sports.  I lived for sports.  I never stopped playing soccer, football (yup), basketball, baseball, softball, racquetball, dancing, roller skating, ice skating, skateboarding, biking, archery and more… I don’t quite know how their lack of interest happened.  Nor do I know how I become so involved in sports.  I couldn’t live without them.  Maybe it was because we didn’t have computers or cable or video games.

7.  I will not give in to my child’s demands.
I did a pretty good job of that with the first two but they never really demanded much.  The third was exactly the opposite and was always demanding.  The fourth and fifth have special needs and it is a minefield to navigate whether it is just them being a moody, demanding child or is it related to their special needs and if we don’t just “give in” our lives will be a living hell.  They kind of get “stuck” and can’t move beyond a certain concept.

8.  My kids will all go to college.
So far striking out on this one.  Three have gone and three have dropped out.  I don’t stress out over it because in each case – that really wasn’t right for them.  Maybe at some point college will be a good fit for them but definitely straight out of high school was not the correct timing.  I thought I would be crushed and feel like a failure if they didn’t go and didn’t succeed.  But it is their lives, I cannot run it for them.  Ultimately – happiness is more important than college.

9.  My kids will dress presentably when we go out and/or at least be clean.
Half the time I have to trick my kids into getting into the car.  It is hard to trick them if I need to get them changed and cleaned up first.  By then the entire affair becomes a major battle.  Each of the kids had their own sense of “style”.  And in many cases I use that word very loosely.  My only concern quickly became whether their clothing choices were inappropriate and one of them was a constant challenge with dressing inappropriately.  Now you would think – Just don’t by her those clothes and she can’t dress like that.  I have no idea where she would get the clothes!  They just always showed up.  Or she would cut them up as soon as she left the house.  Constant constant struggle.  Two of the kids refused to wear matching shoes.  One always wants to wear a costume out in public.  My husband won’t take them out in public like that but I don’t care.  If they are behaving and making correct choices – who cares what they are wearing.

10. My kids will get their drivers licenses at 16 years old so I can stop running them around.
Total fail.  Two do have licenses but were in no rush.  The third will be twenty this month – still no license.  I could not wait to get my license.  It was such a defining moment in my becoming an “adult”.  We’ll see what the timeline for the last two will be…

So there you have it.  I have learned to let alot go, spend more quality time with my kids and try to stop and smell the roses.  Will anything really bad happen if they don’t clean their rooms?  Well, I certainly hope not.  Eventually I will break down and clean them.  But this day will be gone forever.  Do I want to spend it freaking out…