From the Emmy Award-winning director and choreographer Kenny Ortega (“High School Musical” franchise) comes a new epic universe featuring the untold story of Disney classic characters in Descendants on Disney DVD July 31st! As you’re eagerly preparing for the face off between the villainous offspring who must choose between following in their parents’ footsteps to help all the villains regain power or embrace their innate goodness to save the kingdom – checkout this awesome party package. 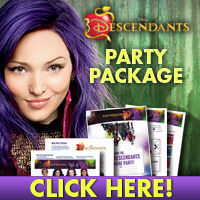