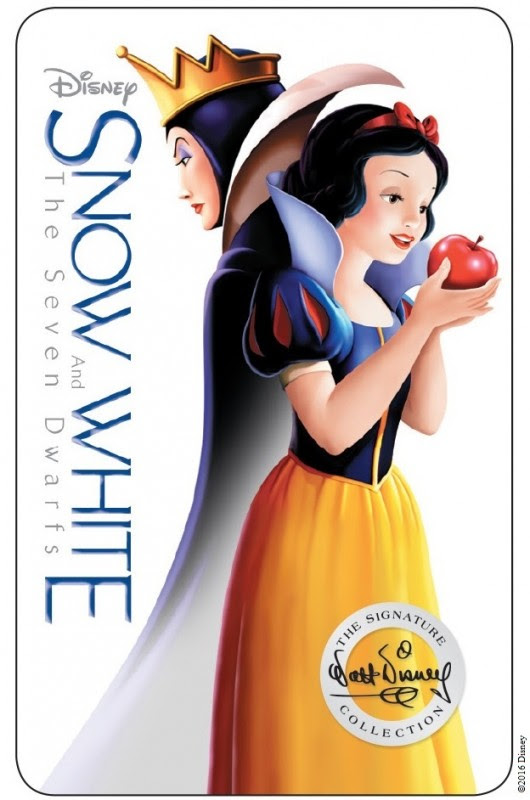 Marking the launch of The Walt Disney Signature Collection

Featuring In-Depth Brand New Bonus Material Including “In Walt’s Words: Snow White and the Seven Dwarfs,” “Iconography,” “@DisneyAnimation: Designing Disney’s First Princess,” “The Fairest Facts of Them All: 7 Facts You May Not Know About Snow White,” “Snow White in Seventy Seconds,” “Alternate Sequence: The Prince Meets Snow White” and Much More!

Forever enchanting and inspiring, Snow White And The Seven Dwarfs embodies The Walt Disney Signature Collection’s legacy of animation.  In this epic story of love and friendship, the kind and beautiful princess Snow White wins the hearts of the Seven Dwarfs and triumphs over the evil plans of a wicked Queen.  Share the movie called “The Greatest Animated Film Of All Time,” (American Film Institute) in High Definition Blu-ray and for the first time ever on Digital HD, with special features for the entire family!

Bonus Features:               In Walt’s Words: Snow White and the Seven Dwarfs – For the first time ever, hear Walt himself talk about Snow White.  Iconography – Explore how this film influences pop culture, art, and fashion.  @DisneyAnimation: Designing Disney’s First Princess – Modern day Disney artists discuss the design of Snow White and how it influenced the look of some of your favorite Disney characters.  The Fairest Facts of Them All: 7 Facts You May Now Know About Snow White – Disney Channel star Sofia Carson reveals seven intriguing facts about Snow White.  Snow White in Seventy Seconds – Rap along with this hip reimagining of the story.  Alternate Sequence: The Prince Meets Snow White – A never–before-seen story board sequence where the Prince meets Snow White.

One lucky The Stuff of Success reader will win Disney Anywhere Digital Codes for Snow White (3 WINNERS).  The prize will be sent directly to the winner from the sponsor. Please allow 6-8 weeks for shipping.  The giveaway will run until 02/02/16 at 11:59pm EST.  Any taxes or other charges that may be part of the prize are the winner’s sole responsibility.  The giveaway is open to United States residents over age 18.  We reserve the right to cancel any giveaway.  No purchase is necessary. One entry per person per household.  This giveaway is in no way sponsored, endorsed or administered by, or associated with Facebook.